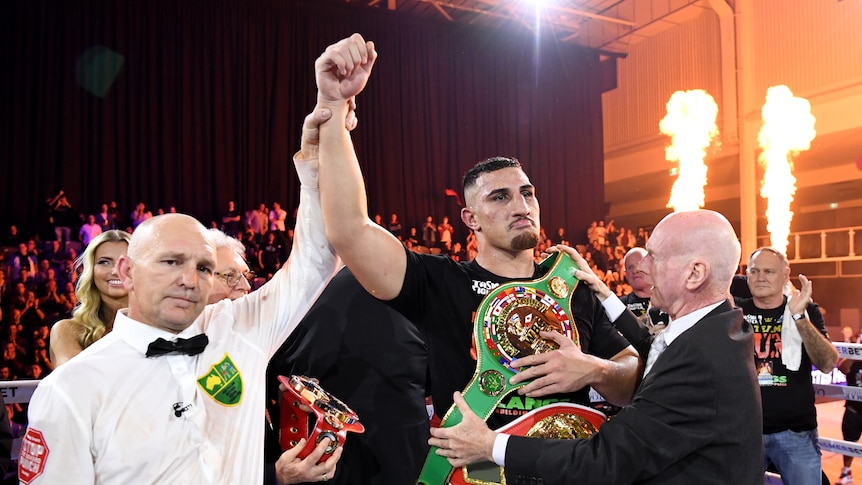 He may have won over Jeff Fenech, but Justis Huni knows his detractors will stick around after he considered Joe Goodall in his comeback to heavyweight boxing.

The 23-year-old had to wait almost exactly a year after beating Paul Gallen to improve his record to 6-0 at the Nissan Arena in Brisbane on Wednesday.

Huni singled out his 29-year-old rival, a former sparring partner who, like him, won amateur world championship medals before turning professional.

But for all his speed, accuracy and intelligence, it was Huni’s power – or lack thereof – that meant many pundits weren’t convinced he could handle the rejuvenated Goodall.

“About the power? Not really,” he replied when asked if he had silenced some critics.

“If the right punch lands, it will come. But I’ve been in the game a long time, I’m not going to look for it,” he said.

“I learned that in my first fights.”

A three-division world title winner, Fenech pushed the bears earlier in the week when he questioned Huni’s power.

But he was blown away by the craft of the 110kg behemoth who he said was throwing combinations usually reserved for divisions far below those of Huni.

Calling it a “masterclass”, he said, Goodall showed “far superior skill to any heavyweight I’ve seen in a long, long time”.

The victory came after a 12-month spell forced by injury and illness and clinched Huni the WBO Oriental, IBF Pan-Pacific and WBC Australasian heavyweight belts.

Crucially, it also earned him top 15 rankings in those three sanctioning bodies, putting him in the conversation for a world title fight.

But, even with Anthony Joshua’s famed boxing promoter Eddie Hearn in the stands, Huni’s team won’t be rushing to send him overseas.

His promoter Dean Lonergan is expected to line up two more fights in Australia this year and potentially keep him at home in 2023 to solidify his base.

Possible opponents include current Australian champion Kris Terzievski, who beat Gallen to win the belt vacated by Huni during her 12-month absence from the ring, and New Zealand’s Kiki Leutele, who Huni was originally scheduled to fight in May.