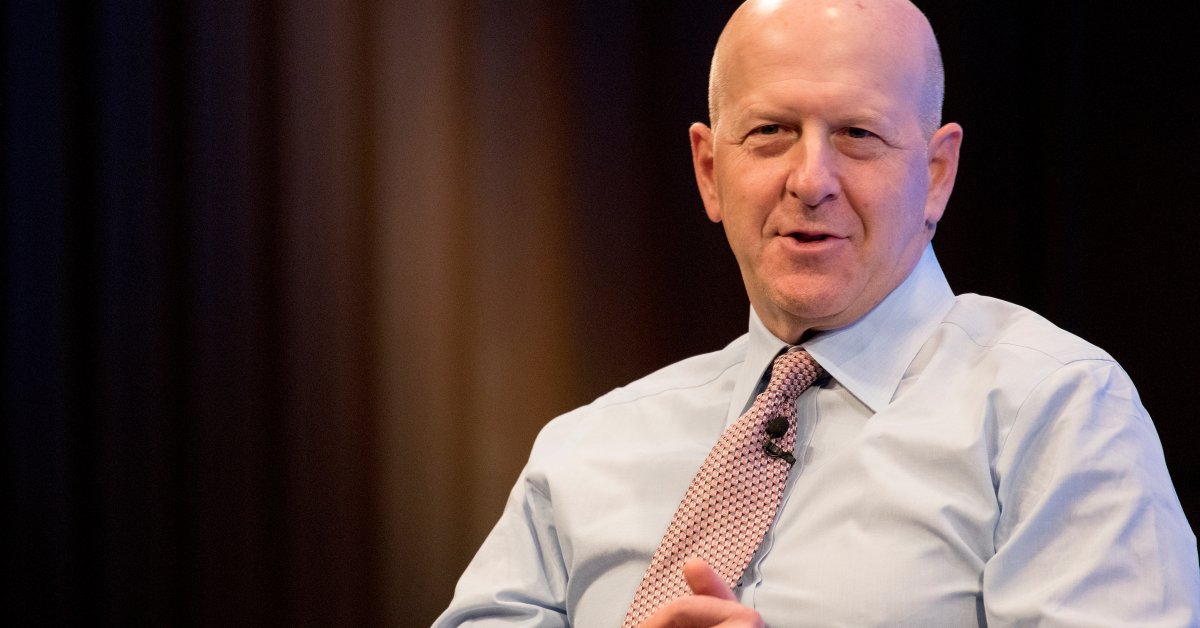 (To receive weekly emails of conversations with the world’s top CEOs and business decisionmakers, click here.)

“None of us can fail to see this for what it is: the invasion of a sovereign state, as flagrant a violation of international law as any we’ve seen in recent memory,” he wrote in a missive to the firm’s global staff of about 40,000. “Our hearts go out to the Ukrainian people and all those standing in harm’s way—their bravery and resilience are an inspiration to the world.”
[time-brightcove not-tgx=”true”]

In his memo, Solomon said the 153-year-old banking giant is “winding down its business in Russia” in compliance with US sanctions, and committing $2 million to organizations offering food, clothing, medical care, and other forms of emergency assistance to Ukrainian families.

The invasion presents Solomon, 60, with a new test as a wartime CEO. Following nearly 20 years at Goldman, running various units including the investment banking operation, Solomon was appointed chief executive in 2018. Since taking over, he has pushed to reduce the firm’s dependence on revenue from stock, bond, currency, and foreign exchange-related businesses and diversify by enhancing its consumer banking, wealth management and asset management divisions. The new strategy has been controversial and Solomon has recently been forced to defend it as financial markets have become increasingly volatile since the start of 2022.

This year, Solomon’s chief challenge will be driving the bank to match the stellar performance of 2021, when it generated record revenue and profit, and saw its highest return on equity since 2007. For his role in last year’s growth, Goldman’s board of directors awarded Solomon with an eye-popping $35 million pay package.

Before the fighting in Ukraine began, he and his executive team were squarely focused on another form of combat: the heated battle for banking supremacy among Wall Street’s elite firms. A big part of that competition hinges on Goldman’s ability to recruit and retain young talent, which explains Solomon’s years-long obsession with modernizing workplace operations and standards. In recent years, he led a campaign to relax dress codes and boost starting pay for the company’s programmers. He also encouraged the firm’s bankers not to work on weekends—unless they were closing a deal.

The set of proposed reforms led Vanity Fair to label him “One Woke Dude” in a 2018 headline. Since then, he has continued to break down rigid, siloed ways of thinking and collaborating. “We really encourage people to be entrepreneurs and find new ways to service our clients or grow our business,” Solomon says. “They can have a big impact on the organization. And I think a lot of them find that really fulfilling. It’s one of the reasons why we’ve been able to hold on to people.”

Solomon spoke to TIME recently about his outsized income, making Wall Street an attractive place to work for millennials and Gen Z, and the role big banks should—and shouldn’t—play in geopolitical conflicts like the war in Ukraine.

For coverage of the future of work, visit TIME.com/charter and sign up for the free Charter newsletter.

This interview has been condensed and edited for clarity.

Do you think the financial industry is playing an appropriate role in ostracizing Russia for its invasion of Ukraine? Do you feel like Wall Street could do more?

Well, I don’t know that it’s the job of large financial institutions to ostracize Russia. We operate in a financial system that has a regulatory and government overlay. Tea [U.S.] government, I think in this case appropriately, has decided to place sanctions on Russia. And it’s our job to make sure that we are executing against the legal letter of the law of those sanctions, but also the spirit of those sanctions, which basically require us to wind our business down in Russia.

It’s not like a light switch. You can’t turn it off. You just can’t flick it on one day—one to turn it off. You have contracts with people. You’ve got to unwind those contracts. And so we are in the process of unwinding our business in Russia. Now, our business in Russia was not that big in the overall context, but the Western governments have decided to put serious sanctions in place. And that requires us to take action, and we’re doing that.

I don’t think businesses are supposed to decide how global trade works in the world. Government sets policy and then businesses follow that policy. I happen to agree very strongly with the policy. What’s going on in Ukraine is absolutely horrible. I think the actions taken are reasonable and powerful actions. But you ask, “are we doing a good job, ostracizing Russia?” That’s not our job. And by us, I mean the financial industry broadly.

Are the sanctions creating any kind of hardships for the banking industry in general, or for Goldman specifically?

In general, are you feeling any pressure to change the way you lead as Goldman tries to attract more Gen Z and millennial workers? Young people seem to be demanding a different kind of leadership, no?

I don’t feel pressure from that workforce. But the workforce is demanding more transparency, more purpose, more authenticity. They want leaders that are relatable. If you think about when I was in my 20s, the CEO of a big organization was like up in an ivory tower, untouchable, inaccessible. You really didn’t know a lot about them. You can barely get near them, right? I think about today, with the transparency of the world, with social media, with access, with communication. Leaders are much more visible. And if you’re going to be visible, they don’t want to just see you as a hard-nose decision maker. They want to see who you are as a person. They want to see you authentically. And they’re demanding. They want to understand that they’re working for a company that has a sense of purpose. They want to see that they’re working for someone who’s a human being, that they can relate to. And so I think that’s an evolution.

I don’t feel pressure from that, but I just think the world’s evolved that way. And I think that’s a healthy thing. That doesn’t mean that there’s no hierarchy in organizations. That doesn’t mean you don’t have to work hard and earn your way and prove yourself. All those things matter for professional success in life.

There’s a lot of talk these days about the future of work and work-life balance, ideas you’ve been grappling with over the course of your career. Have you implemented any pandemic-inspired workplace changes at Goldman that you’ll keep going forward?

Well, I appreciate the question. The future of work is a very interesting expression that over the last year has been more tied to whether or not people are going to physically go back to places of work like offices, for example. But I’ve always thought over a long period of time, that to be competitive for a workforce—Goldman Sachs is a highly, highly skilled, highly valued, group of people—that you’ve got to always be thinking about the things you do that make it a super-attractive place for people to want to work. But for us, that doesn’t mean that people can work from wherever they want to on whatever schedule they want to. There might be businesses that work that way, but ours is a collaborative team-oriented apprenticeship business. And we bring people together.

(For coverage of the future of work, visit TIME.com/charter and sign up for the free Charter newsletter.)

Do you consider yourself to be a reformer? In many places you’ve worked, you’ve come in, and set goals, but also put your own stamp on the way things are done.

I absolutely put my stamp on things. I think putting your stamp on things is different than being a reformer. I wouldn’t use the word reformer, but what I would hope the people who work at the firm say—what I would hope the broad leadership team at the firm says—is that I’m someone that lays out a strategic vision and works with and incentivizes the leadership team to evolve our business, to grow our business. I’m definitely willing to make difficult decisions. Because I sometimes think that’s the job of the leadership. And you’re not always going to be completely popular for every decision you make. But you need to listen, and you need to take in people’s point of view. But ultimately, that’s why being a CEO is very hard—you own the decisions.

Are there recent decisions that are examples of what you’re talking about?

Safe. Lots of them. There are a bunch of things in terms of the structure of this business since I became CEO. There was a huge thing in this organization, when I just decided to take the asset management businesses that were all over the firm and run by different people and put them together in one business, creating an asset management division—and a consumer wealth division. It seemed like a pretty obvious idea to run all your asset management businesses in one division, where you deal with all your capital sources, and all your clients that you manage money for, off of one platform. It’s not like such a heretic idea. But boy, when we suggested it people thought it was a heretic idea. There were some people that left because we were moving forward in a way that they didn’t like. The bottom line is Goldman Sachs is a lot stronger. But that was a difficult decision.

Along those lines, you’ve defended the new strategy recently. Can you explain why you think it’s working?

Our strategy has been to invest in our core businesses and grow market share. We’ve gained market share on our core businesses. And in addition, we’ve made progress in our four growth platforms: transaction banking, asset management, wealth management, and our digital consumer platform. And we’ve taken costs out. Obviously last year, there was an enormous tailwind given monetary and fiscal policy and we way outperformed [return on equity] targets. But we see a lot of opportunity in the areas that we’re growing and we’re quite excited about.

Based on Goldman’s record-breaking 2021 performance, you received a $35 million pay package. What do you say to people who are concerned by the ballooning salaries of CEOs?

Well, first of all, I don’t determine my compensation. The board sets my compensation, based on the competitive marketplace for people in these types of positions and these types of jobs. And our overall performance was really exceptional. We grew our book value by 20.5%. We had a 23% [return on equity]. We delivered for shareholders.

There are always going to be people that are skeptical about the amount of money that people running public companies make. And there are a lot of businesses, both public companies and private companies where people got more money than I do. There’s a competitive market out there. And that’s what I think the board takes into account when they pay public company CEOs. If we deliver, we do well. We don’t deliver, we do less well. And in addition, I’d also say that if you look at my compensation, 70% of it is actually long-term compensation that—whether you get it or not, and what it’s worth—depends on what happens over the next three years .