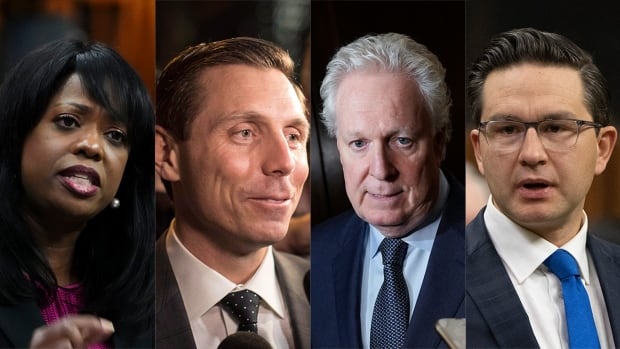 The race to become the next Conservative leader is officially on, with several declared candidates and a formal set of rules to guide the campaign.

So far, Pierre Poilievre, Jean Charest, Leslyn Lewis and Roman Baber are in the race, which culminates in a winner being announced on Sept. 10. More Conservatives, such as Patrick Brown and Scott Aitchison are expected to launch their own bids, the form on Sunday. Other prominent Conservatives, most recently Peter MacKay and earlier this week MP Michael Chong, have said they won’t be joining the fray.

But who gets in, and how the declared candidates campaign, can be significantly influenced by the rules of the race. Those were announced this week by the group organizing the contest, the Leadership Election Organizing Committee (LEOC).

Several key aspects of the rules detailed this week could play a role in determining the outcome, but a few are most prominent, including the amount of money candidates must raise and the timeline around which the campaign will be fought.

“Rules, even though they might seem mundane, they really matter,” said Scott Pruysers, an assistant professor of political science at Dalhousie University.

Lisa Raitt, who was co-chair of the LEOC in the last race in 2020, said the rules for this go-around are similar in many ways to those she helped design and implement.

“Every time a new LEOC is struck, they have to make rules and they start from scratch. But normally what people do is they use precedents,” she said.

Key among the changes Raitt oversaw in 2020 was a significantly increased entrance free for candidates: $200,000 paid to the party plus a $100,000 compliance deposit. That fee made it the most expensive-to-enter race in Canadian history.

“We decided that we didn’t want to have 17 people running for leader, as we did in the 2017 election. So, we decided to do two things: one, increase the entrance [fee]and increase the number of signatures,” Raitt said.

The leadership rules for the current race have kept the $300,000 buy-in but lowered the required signatures from a total of 3,000 down to 500. The fee is required in installations and tied to access to party membership lists, while all the money must be shipped off to the party by end-of-day on April 29.

“These rules do keep people out,” said Bill Cross, a professor of political science at Carleton University.

Not only is raising that kind of money difficult, it’s also just to pay the party, Cross said — more money is needed to actually get your campaign off the ground.

Charest, now officially in the race after weeks of rumours, said prior to his entrance that he needed to see the rules to make his final decision.

That kind of caution makes sense, said Raitt, given the high entrance fee and some timeline constraints.

“I think you really needed to see the rules before you made decisions…. Realistically raising that much money in that short period of time is formidable,” she said.

So, keeping candidates out is one result of some of the rules. But for the candidates who are in, the timeline is also a concern when it comes to strategy and who is advantaged or disadvantaged by the length of the race.

Short contests, Pruysers said, favor established figures who have existing infrastructure and organizations. Supporters of Poilievre had pushed for a shorter race.

“A longer race like we actually have…. That’s going to allow outsiders to come in, people who aren’t currently elected MPs” or otherwise prominent figures, Pruysers said.

Cross said there is always an influx of new members into the party during races, because it’s a moment when political party membership brings tangible benefits.

But a longer race, he noted, “would provide more opportunity for a candidate like Mr. Charest to sign up new members, to recruit and attract members to support himself.”

Under the rules, people will be allowed to vote in the race only if they are members before June 4. That gives contestants just under three months to bring as many people into the Conservative fold as possible.

Cross said that’s around the typical window of time for recent leadership races, but avoiding an even longer race was probably influenced in part by the pressure of a minority parliament. That consideration as well as the incentive to swell the party ranks were both nodded at by the LEOC itself, when it released the rules earlier this week.

“As a party with a long grassroots tradition, these dates will allow as many Canadians as possible to join the Conservative Party and participate in the election of our next leader,” said the group’s chair, Ian Brodie.

“It will also allow Conservative members of Parliament to return to the House of Commons in September with a new leader in place to take on Justin Trudeau and the Liberals.”

The end of the race on Sept. 10 puts this race close to the middle of the pack when it comes to leadership campaign lengths in this century. But Raitt said it’s not as much time as it might appear, given early deadlines for the entrance fees and other logistical challenges.

Despite some earlier deadlines, a six-month-long race does mean more time and opportunity to spend money, and the LEOC has raised the spending limit for this race above what it was just two years ago.

Candidates will be able to shell out up to $7 million over the course of the campaign, a significant increase over the $5 million of the 2020 election.

After the membership cutoff in June, “you’ve got three months to then convince all of those people, to be traveling the country. So it’s a long campaign,” Pruysers said. “And so, a pretty healthy spending limit is probably needed for a longer campaign. They kind of go hand in hand.”

Cross said he didn’t think the expense ceiling would have an impact on the race by actually limiting spending, as it was unlikely candidates would reach the cap.

But, “it does make it hard for the lesser candidates to raise that amount of money that quickly…. It’s hard to raise millions of dollars in a few months when the most you can get from any person is about $1,650.”