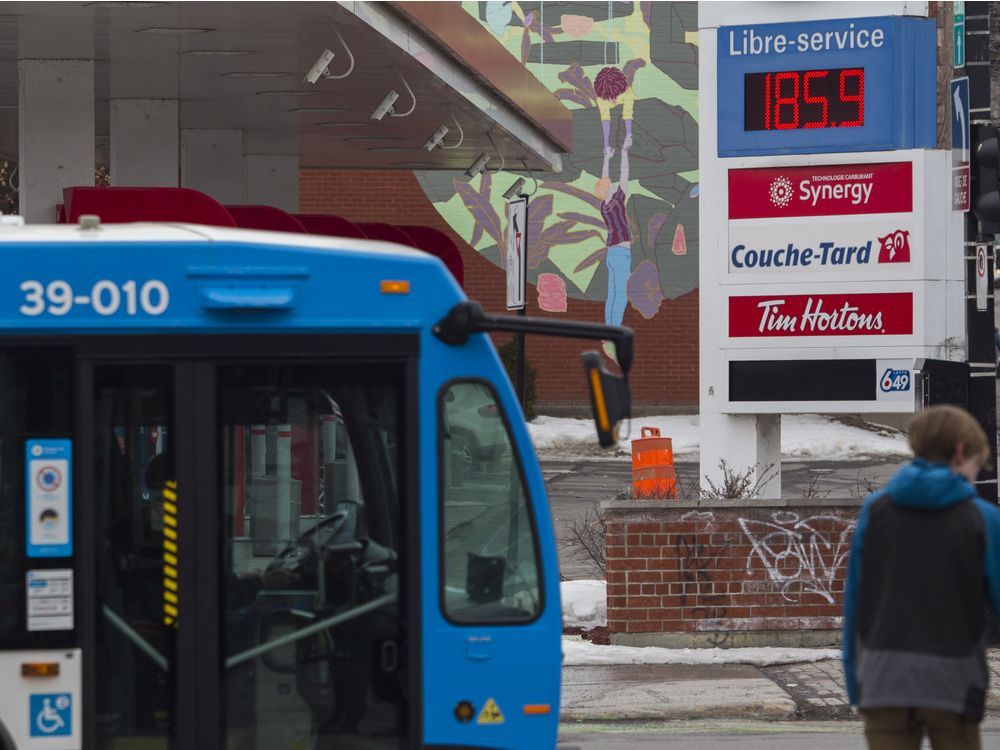 As oil prices skyrocket, causing sticker shock at the pump, an enterprising Quebec car dealer has made headlines for his unorthodox sales promotion.

To help sell some of the 300 vehicles on his lot, including 163 pickup trucks, the owner of Joliette Dodge Chrysler Jeep appeared in a video last week slinging two red canisters and promising to pay the cost of gas for a year for anyone willing to drive off with one (*conditions apply).

To this, Hydro-Québec cheekily chimed in, writing “no gas to buy” on the dealer’s Facebook page with a link to its site where people can calculate the cost savings of opting for an electric car instead.

The social media exchange is a sign of these troubled times.

Russian President Vladimir Putin’s brutal, unprovoked invasion of Ukraine has led to sanctions, including bans on the import of its oil. The resulting supply crunch caused the price of crude to spike to more than $100 a barrel, and some predict it could go much higher.

With motorists getting vertigo filling up their vehicles amid already record inflation, it’s no wonder car dealers with an inventory of trucks and SUVs are resorting to desperate measures. The last time oil prices soared so dramatically, in 2008, consumers ditched gas guzzlers in droves. This sent the Big Three North American automakers into bankruptcy protection, as they struggled to compete with demand for more fuel-efficient Japanese and European cars.

But since this shift to smaller, gas-sipping vehicles failed to become permanent, we’re now facing another painful and more urgent reckoning.

As the Intergovernmental Panel on Climate Change recently reported, the devastating effects of global warming are already being felt and are rapidly intensifying. Meanwhile, the window of time to shift away from fossil fuels and decarbonize the global economy is fast closing.

World leaders are presently trying to avert a wider war between Russia and the West, stave off nuclear armageddon, address an unfolding humanitarian catastrophe in Ukraine, defend the rules-based international order and ensure a stable and affordable supply of the oil and gas on which the world is still so utterly dependent.

However, we must learn from what happened after 2008 to change our destructive habits for good.

The voracious appetite for big vehicles rebounded after oil prices dropped. Even in Quebec, once a strong market for small cars, two out of three new vehicles sold in the province by 2019 were SUVs or light-duty trucks. The result is that tailpipe emissions are the largest and fastest growing share of Quebec’s greenhouse gases.

Paradoxically, Quebec is also one of the biggest markets for electric vehicles, which currently account for 10 per cent of new car sales in the Montreal region. But uptake is not swift enough for Quebec to reach its commitment to cut emissions to 37.5 per cent below 1990 levels by 2030. A recent report from the Quebec Environment Ministry suggests that at the current rate, they will only decline by about 13 per cent.

Équiterre is now pushing for Quebec to move up the ban on the sale of new gasoline-powered vehicles to 2030 from 2035, and boost its goal of getting more EVs on the road, currently slated to increase by about one per cent per year.

A consultants report by Dunsky for the City of Montreal also found that with current rebates and incentives, EV sales will account for only one-third of new car sales in 2030, but that with a stronger push from policymakers — including a faster rollout of supporting infrastructure like charging stations — the proportion could go as high as 70 per cent.

But there are potholes on the accelerated route to electrification, namely that global demand for EVs will jump in league with oil prices. The consequences of Russia’s unacceptable war in Ukraine is also jacking up the price of the raw materials used in electric cars, causing possible production delays and dashing the hopes of manufacturers to deliver more affordable models.

Of course, electrifying the automobile fleet alone won’t get Quebec where it needs to be in terms of slashing emissions. Higher petrol costs will hopefully prompt many motorists to take public transit, which has suffered sagging ridership since the onset of the pandemic. Better financing of transit is necessary to make it the go-to choice for travel. Remote and hybrid work must continue to minimize commuting in order to save both money and the planet. Plans to build more walkable, bikeable cities must be hastened to cut our reliance on the solo automobile, period.

It’s tragic that it has taken a despicable attack on Ukraine to give us yet another urgent reason to change our unsustainable ways.

Sign up to receive daily headline news from the Montreal Gazette, a division of Postmedia Network Inc.