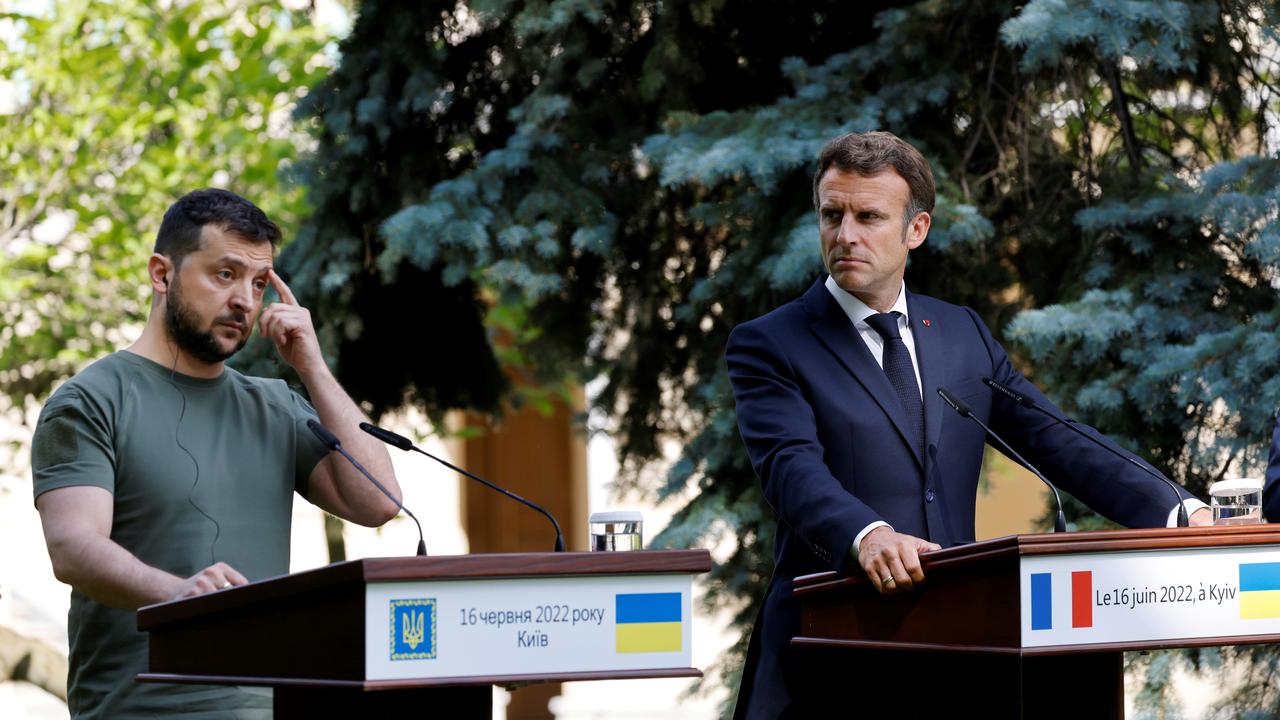 The leaders of Germany, France and Italy – all criticized in the past by Ukraine for support deemed too cautious – visited Kyiv and offered hope of membership in the European Union to a country advocating for weapons to repel the Russian invasion.

Air raid sirens sounded in Kyiv at the start of a visit by French President Emmanuel Macron, Germany’s Olaf Scholz and Italy’s Mario Draghi, with the leaders visiting a nearby town destroyed at the start of the war.

After meeting with Ukrainian President Volodymyr Zelenskiy, the leaders signaled that the country should be granted EU candidate status, a symbolic gesture that would bring Ukraine closer to the bloc.

Invest in the journalism that made the difference.

Scholz said Germany had taken in 800,000 Ukrainian refugees who had fled the conflict and would continue to support Ukraine for as long as needed.

“Ukraine belongs to the European family,” he said.

On the battlefield, Ukrainian officials said their troops were still resisting heavy Russian bombardment in the eastern city of Sievierodonetsk and described further progress in a counteroffensive in the south.

“There is a direct correlation: the more powerful weapons we get, the faster we can liberate our people, our land,” he said.

As European leaders tried to show solidarity with Ukraine, the continent’s dependence on Russia for much of its energy supplies was laid bare as gas supplies plummeted via a major gas pipeline in recent days.

Russia has blamed sanctions for delaying the delivery of equipment sent abroad for repair, but Germany and Italy have dismissed Russia’s explanation for the shortfall which has raised concerns about to supplies for the winter.

“(We) believe these are lies. In reality, they are making political use of gas like they are using grain for political purposes,” said Draghi from Italy.

Russia says grain shipments are being stifled by sanctions and mines laid by Ukraine, and denies responsibility for an emerging global food crisis.

The visit to Ukraine by the EU’s three most powerful leaders had taken weeks to organize as they all brushed off criticism over positions they said were too respectful of Russian President Vladimir Putin.

Critics have compared Macron and Scholz to British Prime Minister Boris Johnson, who visited Kyiv more than two months ago.

The leaders, who were joined by Romanian President Klaus Iohannis, visited Irpin, a town northeast of the devastated capital shortly after the invasion began on February 24, where retreating Russian forces left bodies littering the streets.

After the talks in Kyiv, Macron said some sort of communication channel was still needed with Putin.

The main battle in recent weeks has taken place over the eastern city of Sievierodonetsk, where Ukrainian forces are entrenched in a chemical plant with hundreds of civilians.

“Every day it becomes more and more difficult because the Russians are firing more and more weapons into the city and trying to storm it from several directions,” Sievierodonetsk Mayor Oleksandr Stryuk said Thursday.

An airstrike hit a building housing civilians in Lysychansk across the river on Thursday, killing at least three people and injuring at least seven, regional governor Serhiy Gaidai said.

In the south, Ukraine says its forces have made inroads into Kherson province, which Russia occupied at the start of its invasion.

There have been few independent reports to confirm battlefield positions in the area.

Save this EOFY while you make a difference

Australia has spoken. We want more from people in power and deserve a media that keeps them on their toes. And thank you, because it has been said very clearly that at Crikey We are on the right path.

We pushed our journalism as far as we could go. And that was only possible with the support of readers. Thanks. And if you haven’t subscribed yet, now is the time to join tens of thousands of Crikey members to take the plunge.