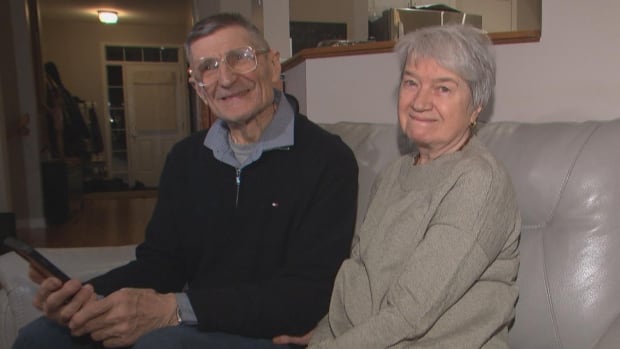 Borys Yehorov lets out a heavy sigh and smiles when asked what it was like to land at the Montreal airport and reconnect with his family.

“They were happy to see us,” said Anna Wallach, translating for her Russian-speaking father. “But they were also sad.”

“They realized that the life that they had before, they were never going to have it. They left it behind.”

Yehorov, 77, and his wife Galina Yehorova, 76, were living a quiet, comfortable life in their book-filled apartment in central Kharkiv before the conflict with Russia hit close to home.

The couple’s apartment is not far from a regional government building that suffered heavy damage from Russian shelling early in the invasion.

When the attacks began, the Yehorovs initially took shelter in their base.

Then on March 5, with food supplies running low and fearing the arrival of ground troops, the couple decided to flee, traveling to the train station by taxi.

Warned by others to travel light, each had packed only one backpack crammed with warm clothes, pills, documents and food.

“They were terrified,” Wallach said.

Borys Yehorov, alongside his wife Galina, describes the few items the couple decided to take when they fled Ukraine, carrying only one backpack each. 0:39

After waiting for hours on the platform as bombing continued, they joined a crowded train, Yehorov said, with up to 14 people in a compartment.

The train moved at a slow crawl for 28 hours toward the border with Slovakia, which they crossed on foot, Yehorova wrapped in a blanket provided by volunteers.

The couple then bussed their way further west. In Prague, after some complications involving COVID-19 tests and one night spent in an airport, they finally boarded their Wednesday morning flight to Canada.

“They went through such a difficult journey,” Wallach said.

Maya Wallach, Anna’s daughter, said she was proud of her grandparents.

“[They] are so brave for even leaving in the first place, and I’m so happy they did,” she said.

Maya knew her grandparents wouldn’t be arriving with much, so she put out a call on Facebook for clothes and other much-needed supplies.

People went above and beyond, she said.

“To go and buy them clothes based on their sizing that I provided through Facebook was really touching,” she said.

On Thursday night, the family gathered in the Wallachs’ living room in Stittsville, an Ottawa suburb.

Anna Wallach, who grew up in Kharkiv, was relieved to put her sleepless nights of worry behind her and have her parents safe and sound.

When the city administration building was bombed, she knew it was “very close” to her parents’ home.

“I called them. They didn’t answer,” Wallach said, noting the seven-hour time difference between Canada and Ukraine.

“But the only thing that made me relieved was that I saw my dad was online like five minutes before I tried to call him. So I was like, ‘Okay, they probably went to the basement.”’

Other relatives remain behind in Ukraine, including Wallach’s brother and his own family.

And so already — despite his long, five-day journey to safety — Yehorov’s thoughts turn to home, Wallach said.

“He wants, he believes, he hopes that he’s going to go back one day and see his son and his grandson and his city where he spent most of his life. His home, of course,” she said.

“And he also wants to help to rebuild the city — because the city is in ruins.”