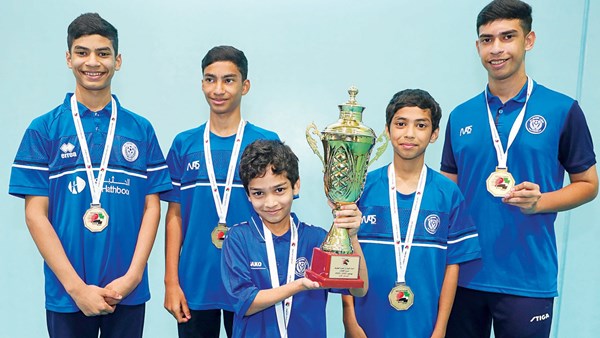 “Eyal Al-Hawai” imposed on the players of Al-Nasr Club, the preference of “Al-Ameed” in the current table tennis season 2021-2022, after the five brothers Abdullah, Muhammad, Ali, Hussein and Youssef Muhammad Ahmed Al-Hawaii helped crown the “Blues” with the championship titles for the team competitions in the Youth, Juniors and Cubs categories respectively as an unprecedented achievement.
“Eyal Al-Hawai” brought the “Al-Ameed” team back to first place in the age group titles for table tennis, which was the best compensation for losing the two league titles and the Cup of His Highness the President of the State in men And the “third” wasl, where the duo Ali and Youssef Ahmed Al-Hawai participated in crowning the “Blues” of the title.
The junior league competitions, which were crowned with the title “Al-Ameed”, also overtook their competitors, Al-Ahly young “finalist” and Sharjah “third”, with the participation of the trio Ali, Abdullah and Youssef Al- Hawaii, which is the first title win since the 2017-2018 season, after Sharjah crowned the title in the 2018-2019 season, The competition was absent for two seasons before returning in the current season.
The brilliance of “Ayal Al-Hawai” with “Al-Ameed” in leading the “Bleues” to regain the title absent at the level of the youth league since the last coronation 2014-2015, and “Le Brigadier” crowned the title at the expense of rivals Sharjah “runner-up” and Al-Wasl “third”, with the participation of all five brothers during the league career, in which “Blue” played 18 games.
China’s Shanqi, Technical Director of Table Tennis at Al-Nasr Club, and the game’s oldest coach at Emirates level at present, saw ‘Ayal Al-Hawi’ as an important addition to the table teams in the “Brigadier”, and said: “When I arrived in the Emirates about 27 years ago, more precisely in 1995, it was Ahmed Al-Hawai, the father of the stars of the current dean, is a former player of the club stage teams as a goalkeeper.
He added: “About 8 years ago, the journey of the five brothers began at the club after their father decided to enter the game, and they began a long journey of training and rehabilitation before moving on. ‘currently reaching the stage of continued participation and achievement of achievements and titles.’ Rashid is now four years old.
On the other hand, Ahmed Al-Hawai, the father of the five brothers, expressed his joy with the positive results and good achievements of his sons in their journey with the “Brigade”. player between more than one hobby between volleyball and athletics at Al Wasl Club, and football in the stadiums of Al Nasr Club, I was keen to reveal my children’s favorite sports since childhood, and I was guided to the game of table tennis, which became a passion for them.