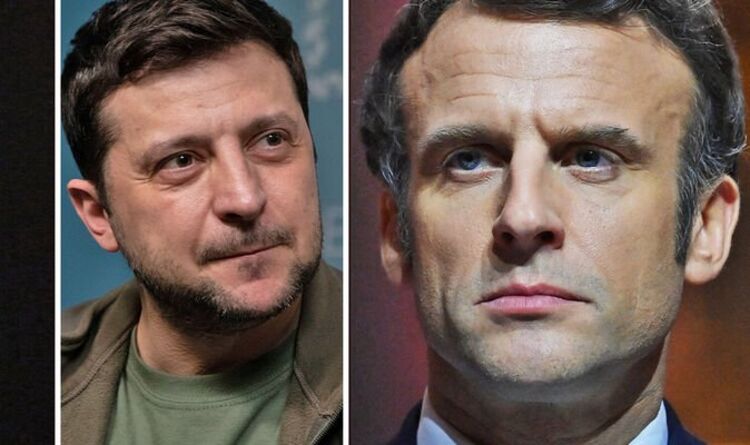 Ukraine’s leader has seen his approval ratings soar among his fellow countrymen for his leadership during the war against Russia. Prior to hostiles only 25 percent of Ukrainians viewed their President favorably. Now Mr Zelensky enjoys over 90 percent approval ratings, a figure that would be envied by any political leader.

A series of slickly produced social media broadcasts have been key to transforming his popularity.

The public addresses have helped to galvanize and unite his fellow Ukrainians to resist and fight back against the invading Russians.

One Western politician who appears to have been paying close attention to Mr Zelensky’s transformation is the French President, Mr Macron.

The French leader faces a re-election contest in April and currently some 53 percent of voters disapprove of his performance.

This has apparently led Mr Macron to try and reboot his image at the Zelensky.

“How else to explain the bizarre series of photoshoots emanating from the Élysée?

“Last week, after an unsuccessful phone call with Putin, we saw Macron, in a white shirt, in three poses of anguish: solely clutching the back of his chair in Versailles; pinching the bridge of his nose in anguish; hands knitted in pain in front of his face.

“The problem for Mr Macron, as for other leaders, is that political photoshoots must match the weight of the real-world events

“A bit of primping and presentation is forgivable, but the gravitas cannot be forced.”

He added: “If Zelensky looks like the man for the job; Macron looks like a man working for Steve Jobs, less wartime leader than Warhammer leader.”

However, a French presidency official said that Putin showed no sign of wanting to end the conflict.

The Kremlin readout of the call said Putin briefed Mr Macron and Mr Scholz about the state of play in negotiations between Moscow and Kyiv and responded to their concerns about the humanitarian situation in Ukraine.

It did not mention a ceasefire and accused Ukraine of using civilians as human shields.

Throughout his Presidency, Mr Macron has repeatedly sought to reach out to Putin in an attempt to build bridges between Europe and Russia.

He emphasized the need for close relations with Moscow in his 2017 campaign book “Revolution”, despite Russia’s contested annexation of Crimea in 2014 and subsequent invasion of Ukraine’s Donbas region.