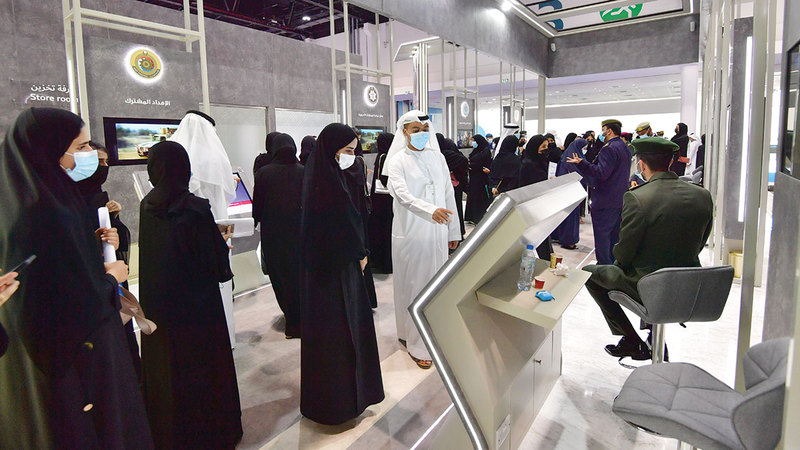 Graduates of various academic disciplines, among young citizens, expressed their optimism about the measures recently adopted by the Council of Ministers to promote the process of emiratization in the labor market in the country at the level of the public and private sectors.

They said they had done everything to obtain jobs corresponding to their specializations and tendencies, and were waiting for their attempts to bear fruit, pointing out that the new decisions of the Cabinet reduced the duration of the job search, and moved this file to a new promising step.

The package of decisions on the file of emiratization in private sector establishments, which was recently adopted by the Council of Ministers, obliged private sector employers, who have 50 or more workers, with an emirate rate for skilled jobs by at least more than 2% per year, provided that companies that achieve qualitative results in the employment and training of citizens with an unprecedented set of administrative and material incentives, while companies that do not commit to achieving the target percentages face punitive measures.

In detail, Moza said that she had submitted a large number of applications to government and private institutions, but failed to be appointed, although she qualified for the jobs.

“Young citizens aspire after graduating from university to get a job opportunity to employ and develop their skills, and add their mark on the march of the nation,” she added.

Alia Muhammad, who holds a bachelor’s degree in sociology and social work with distinction, pointed out that the lack of practical experience of new graduates is one of the most important problems facing young citizens, especially since the jobs offered require experience.

Noura Berman expressed her enthusiasm and desire to work after graduating with honors; He was the first to be paid. She said: “I have ambition and a strong will, even though I have been at home without a job for a long time.”

Noura had a training opportunity in one of the institutions that serves her specialization, but she considered it insufficient, expressing her optimism about the new ministerial decisions, which will produce a new reality in the labor market.

Asmaa Hassan (a graduate of the Faculty of Mass Communication) said, “I sometimes wonder if I would find a job quickly if I had studied another major, like engineering or economics.”

Moza Al Balushi said she graduated in 2019 and started looking for a job but was unsuccessful. She added, “I have visited many exhibitions in Sharjah and Dubai, and submitted many job applications. I also submitted my papers to many authorities and institutions, but to no avail.

And she added: “The introduction of job platforms such as (Dubai Careers) and (Nafes) gives us hope that we will soon have a share of the jobs.”

‘Emirates Today’ conducted several surveys on social media sites to find out how citizens benefit from annual job fairs, where the word ‘experience’ was repeated in vetted comments. Participation considers the barrier to be the experience requirement, and if available, another barrier is that the age is beyond the appropriate age to accept the job.

People pointed to the lack of job opportunities that would allow them to learn and gain experience, “because most companies are looking for someone with enough experience, which makes waiting longer to get a job”.

One said, “They ask you for experience when you’re a fresh grad. If you’re not working, then where do you get the experience?” Another asked, “How can you you are a recent graduate and you must have two to five years of experience?

The results of an ‘Emirates Today’ poll published on the Twitter platform, in which 291 people took part, showed that 42% of participants believe that the experience requirement is the main reason for the difficulty of obtaining a job. , and they considered it an obstacle for new graduates, while 31% of them see that the biggest obstacle is “the lack of seriousness of companies”, and 27% see that the obstacle is the weakness salaries.

For his part, the Head of National Framework Development, Issa Ahmed Al Mulla, highlighted the importance of job fairs and their effective role in providing employment opportunities to citizens, as an excellent job board platform.

He said: “Determining criteria for measuring business performance and employment rate after the end of the exhibitions will effectively contribute to increasing the employment percentage of Emiratis and activating the monitoring of participating institutions so as to develop the exhibitions. employment. .”

He also underlined the importance of having clear criteria to measure the performance of institutions participating in job fairs for the benefit of the job-seeking citizen and the institution.

Al-Mulla called on institutions to take advantage of job fairs and take the issue of emiratization seriously, especially with the recurrence of this problem recently.

The Cabinet recently approved an unprecedented package of incentives, including the reduction of fees for the services of the Ministry of Human Resources and Emiratisation, up to 80% for private sector companies registered with the Ministry, which obtain qualitative results in the recruitment and training of citizens. , in addition to increasing the target percentage of localization of skilled jobs by 2% per year in private sector companies, whose facilities have 50 or more employees, with the aim of creating employment opportunities exceeding 12,000 jobs per year. year for citizens of the private sector and various economic sectors of the country.

The Council approved the approval of a monthly contribution of 6,000 dirhams on non-compliant companies, starting next year, for each citizen who was not employed.

The Minister of Human Resources and Emiratization, Dr. Abdul Rahman bin Abdul Manan Al Awar, has confirmed that the decisions taken by the UAE government in the emiratization file will provide job opportunities for national executives in over 13,000 private sector establishments in the current period. year, pointing to the allocation of 1.11 billion dirhams to the budget of the support program Citizens’ salaries in the private sector, through the “Nafis” initiative for the current year, expressing the aspiration of the ministry to allocate 1.82 billion dirhams to the employment of citizens during the following year, bringing the total amount of support for the program to 2.93 billion dirhams in two years.

To motivate private sector companies and institutions to interact with the new government decisions regarding emiratization, the Council of Ministers allocated an unprecedented set of administrative and material incentives, including reductions of up to 80% on fees for employer services provided by the Department of Human Affairs. Resources and Emiratization, the main ones being “work permit fees. “Out of the country”, “in-country work permit fees”, “work transfer fees from one establishment to another”, “renewal fees and modification of work permits”, “issuance of the register of the establishment”, “issuance or renewal of an employment contract” and “cancellation of the work permit and the contract”.

On the other hand, penal measures have been approved against establishments that do not commit to achieving the targeted emirate rates, amounting to a fine of 6,000 dirhams per month for each citizen who has not been employee, with establishments being given a six-month grace period before approving the fines which come into effect from January 2023.

Citizens: Platforms such as “Dubai Careers” and “Nafis” give us hope of having a share of jobs.