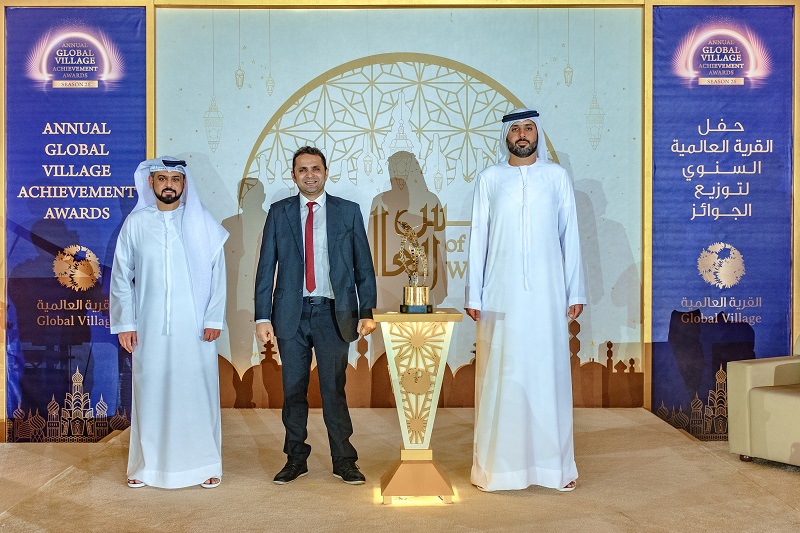 ‘Emirates Al-Youm’ newspaper won the award for ‘Best Article Published in an Arabic Language Newspaper’ as part of the Global Village Media Awards, for the 26th season, at a ceremony hosted by the village yesterday to celebrate its partners for the 26th season, media professionals, operating companies, the travel industry and distinguished media professionals working in state media institutions.

The village is one of the largest cultural parks in the world and the premier family destination for culture, shopping and entertainment in the region. The ceremony took place during the Global Council yesterday, where awards were given out in recognition of the most significant achievements across several categories, and in recognition of the partners’ valuable contributions to the success of successive seasons of the Global Village.

Thousands of entities, from all over the world, have contributed to the success of Mawasem for the Global Village and to offer the most beautiful experiences for unforgettable memories to millions of guests at the heart of the masterpieces. Sector partners also help support Global Village’s efforts to strengthen Dubai’s position as a premier tourist destination. Media professionals and the media play an exceptional role in highlighting the offers and events offered by Global Village and its partners, emphasizing exceptional achievements that contribute to providing customers with unique experiences season after season. .

Bader Anwahi, CEO of Global Village, said, “Today’s awards come in recognition of the successful and determined efforts of our partners to contribute to the success of Season 26, and to celebrate their outstanding achievements and superior capabilities. in their respective areas of specialization. This year we have added a number of awards which highlight some of the values ​​we hold dear, and as an organizer we pride ourselves on providing continued support to entrepreneurs, and for this reason we have announced a new award in recognition of the efforts of promising companies and encouraging them to continue.

He emphasized that Global Village is always keen to strengthen its role as an innovation hub in order to maintain its role as a leader in the entertainment industry in the region and continue to deliver the unique experiences that customers expect.

The Global Village and its management expressed their thanks and gratitude to strategic partners and governmental, semi-governmental and private entities and agencies for their support and participation, which played an important role in the success of this season.