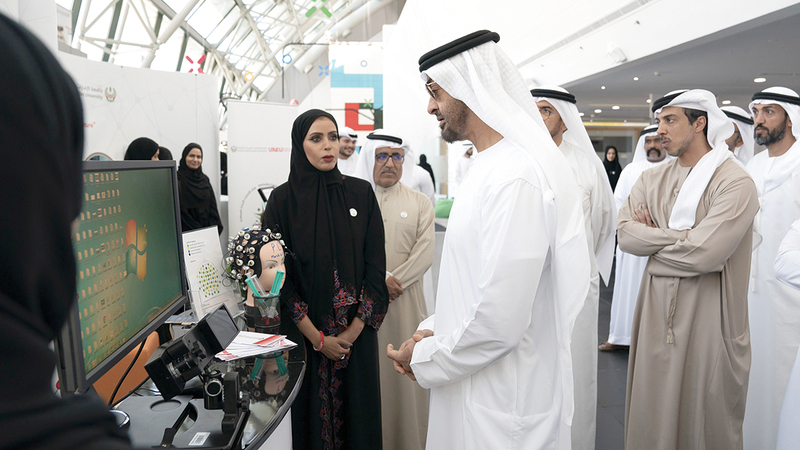 The education sector came at the top of the priorities of His Highness Sheikh Mohamed bin Zayed Al Nahyan, President of the State, as His Highness has always stressed the need to develop the capacities of students and to develop their skills, in accordance with the requirements and challenges of the 21st century, and enable them to build their present and the future of their country, while being proud of the values ​​of their community, their homeland and their identity.

His Highness has stressed, on several occasions, that “our student children are our treasure, our balance and our investment for the future”, emphasizing that “education comes first…and it is the solid basis for start in the after-oil phase.”

The Emirates Center for Strategic Studies and Research published a book titled “Mohammed bin Zayed and Education”, which confirmed that His Highness Sheikh Mohammed bin Zayed Al Nahyan’s interest in education had major tributaries that stretched in the school of the late Sheikh Zayed bin Sultan Al Nahyan, the founding and visionary leader, the wise woman who laid the foundations of the United Arab Emirates and its rebirth in various fields.

The book pointed out that the most important foundations of His Highness Sheikh Mohammed bin Zayed’s vision for the renaissance of education, which foresaw the future, is to elevate the status of education, as a major driver which contributes to the development of the country.

The book indicated that His Highness’ interest in education is not limited to the development of visions, ideas and general perceptions, but extends to field monitoring on the ground, to the implementation of these visions and ideas, and to provide the educational field with everything it needs to fulfill its mission, and continuous communication with educational institutions, teachers and students.

His Highness’s vision on the advancement of education is to pay attention to scientific and ethical aspects, from His Highness’s belief that educational institutions are charged before others with deepening moral values ​​in young people and young people, and are capable of advancing this task, and that ethics is an essential element of the comprehensive and sustainable development system adopted by the United Arab Emirates.

His Highness has repeatedly called for allowing families and parents of students to interact and help support educational efforts, as all are partners in the responsibility of building national minds and preparing future generations. .

Among the words of His Highness Sheikh Mohammed bin Zayed Al Nahyan, in this regard, that “the bet of the UAE in the years to come will be to invest in education; Because it is the solid basis for embarking on the post-oil phase.

His Highness also said: “The teaching profession has been associated with high status and an exceptional position in our souls, and its importance, position and strength derive from its noble mission, which has been drawn from educational values, noble principles, science and knowledge. as a methodology that frames it, and makes the teacher an essential partner in developing minds, refining morals, building and developing societies”.

His Highness also stressed that “the educational role of the school is expanding more than at any previous stage at this stage, and we are confident that teachers are up to the responsibility entrusted to them, and they are fully aware of the central role of education in promoting the pioneering renaissance of Emirati development.”

His Highness’s words reveal a vision that lays the foundation for a modern global education that keeps pace with the ambitions of the UAE, anticipates the future for generations and inspires the youth of the UAE to build a strong armed state. of science and knowledge.

His Highness’s initiatives and directives in the education sector have confirmed the distinguished position he enjoys with His Highness, as it is the cornerstone on which the construction of the State is based, because His Highness considered that education is the gateway to a safe passage to the future.

It believes in its role in the construction of the human being, the promotion of the values ​​of belonging and loyalty, the confrontation of dark ideas and the support of major national projects.

His Highness Sheikh Mohammed bin Zayed Al Nahyan has launched an initiative that supports the educational process with the subject “Moral Education” in curricula and curricula, and it includes five main elements, which are ethics, personal and community development, culture and heritage, civics education, rights and responsibilities.

His Highness said that the UAE is distinguished by its cultural identity and authentic moral values ​​based on the heritage of values ​​from the teachings of true religion and traditions of fathers and grandfathers who uphold the values ​​of tolerance , respect, cooperation, love of good, belonging, giving, sacrifice and unlimited giving to the fatherland.

His Highness added, via Twitter, that “virtuous values ​​are a solid foundation in nation-building, rebirth, advancement of peoples and development,” stressing the importance of the growing role of educational institutions in preparing and the education of young people and the building of their active and ambitious personality, in addition to the central role of the family in promoting values, virtues and ideals high in the hearts of children.

In 2005, by the decision of His Highness Sheikh Mohamed bin Zayed Al Nahyan, the Institute of Applied Technology was established, and the decision brought about a fundamental change, as the Abu Dhabi Institute for Education and Training Professionals was established in 2007, and has provided an education opportunity for all sons and daughters in the country.

His Highness’ initiatives in the field of vocational and technical education have highlighted the need to improve it and support innovation. This has been demonstrated by the increase in the number of students at the Abu Dhabi Center for Technical and Vocational Education and Training at the state level, and the children of the center are now the best in academic terms. .

As directed by His Highness, the UAE has attracted international universities, with the opening of a branch of Sorbonne University – Abu Dhabi and New York University – Abu Dhabi, with the aim of open horizons and areas of development for learners, and the need to develop human resources through advanced and targeted education.

His Highness was also keen to increase the number of students enrolled in graduate programs at the Institute of Petroleum, Khalifa University and Masdar Institute.

Khalifa University has launched the Mohammed bin Zayed International Robotics Competition, under the patronage of His Highness, which is a prestigious global prize, with a total prize pool of five million dollars, and has an ambitious global participation.

As for scholarships, the “Sheikh Mohammed bin Zayed Scholarship for Higher Education” program was launched in May 2011 to fund scholarships for Zayed University graduates to obtain master’s degrees and doctorate.

His Highness Sheikh Mohamed bin Zayed Al Nahyan spearheaded the launch of the Mohammed bin Zayed Award for Best Teacher in the Gulf as a sign of appreciation and gratitude for the central role of the teacher in educating generations and Austria , bringing the total number of countries targeted to 13. .

The award paved the way for foreign and non-Arabic speaking teachers from private and international schools to apply and enroll in English, in addition to creating qualitative development plans with the aim of conveying the educational message of the award to the world.