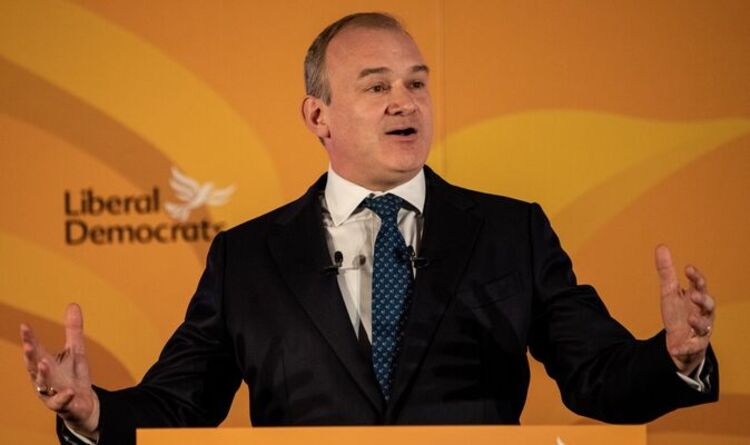 The Liberal Democrat leader took a swipe at the Home Secretary during his keynote conference speech in York earlier today over the UK Government’s response to the Ukrainian refugee crisis. Millions of people are understood to have been displaced following Vladimir Putin’s invasion of Ukraine.

But while Poland has reportedly taken in around 1.5million refugees and 100,000 Ukrainians have ended up in Germany, the UK has processed just over 3,000 visa applications.

Even Ireland has taken in more than Britain after the Irish Taoiseach Micheal Martin revealed 5,500 had been taken in on the Emerald Isle.

During his speech to party activists, Sir Ed Davey said: “Priti Patel’s response to this humanitarian catastrophe – the biggest in Europe since the Second World War – is utterly shameful.

“She has answered desperation with delays, crisis with confusion and pain with paperwork.”

He added: “The incompetence, indifference and sheer inhumanity we have seen from the Home Secretary does not befit our country, with its proud history of providing sanctuary to those in need.

JUST IN: ‘A disincentive!’ Keir Starmer on the spot as Ridge dismantled Labor windfall tax plans

“Priti Patel’s inaction does not benefit the British people, with all their compassion and generosity.

“It couldn’t be clearer that Priti Patel is not up to the job.

“The buck stops with the Prime Minister.

“So Boris Johnson must sack her now.”

But Sir Ed Davey’s comments come just hours after Housing Secretary Michael Gove confirmed more than 3,000 visas have now been processed out of the 22,000 applications submitted.

Mr Gove told the BBC: “We are processing them rapidly and indeed the Home Secretary has deployed additional resources, more human beings, more technical capacity to ensure that we can process them.”

However, the process will make another change on Tuesday to help speed up applications further.

He said: “Tomorrow we will be launching a website which will allow anyone who wants to help to register their interest and then from Friday we will have a process set up whereby we can match families from Ukraine with individuals here and we hope that within a week there will be people who can benefit from that scheme.”

The program will see Brits receive £350-a-month to house a Ukrainian refugee.

DON’T MISS:
Putin could be suffering from ‘roid rage’ from cancer drugs [REVEAL]
Putin will invade EU cities if the West fails to intervene [INSIGHT]
Kyiv will only fall if it is ‘razed to the ground’, warns Zelensky [SPOTLIGHT]

Mr Gove said he is “exploring” whether he himself can take in a refugee and hopes the UK will welcome “tens-of-thousands” of Ukrainians.

Four in ten people said they were “embarrassed” by the Government’s approach to the Ukrainian refugee crisis, according to a recent YouGov survey.

The Home Secretary has also faced pressure over her handling of the Calais crossings – which saw a record-breaking 28,431 migrants reach British shores in 2020 – and after it was revealed Ms Patel reached a £340,000 settlement with the former Home Office permanent secretary Philip Rutnam over bullying allegations.