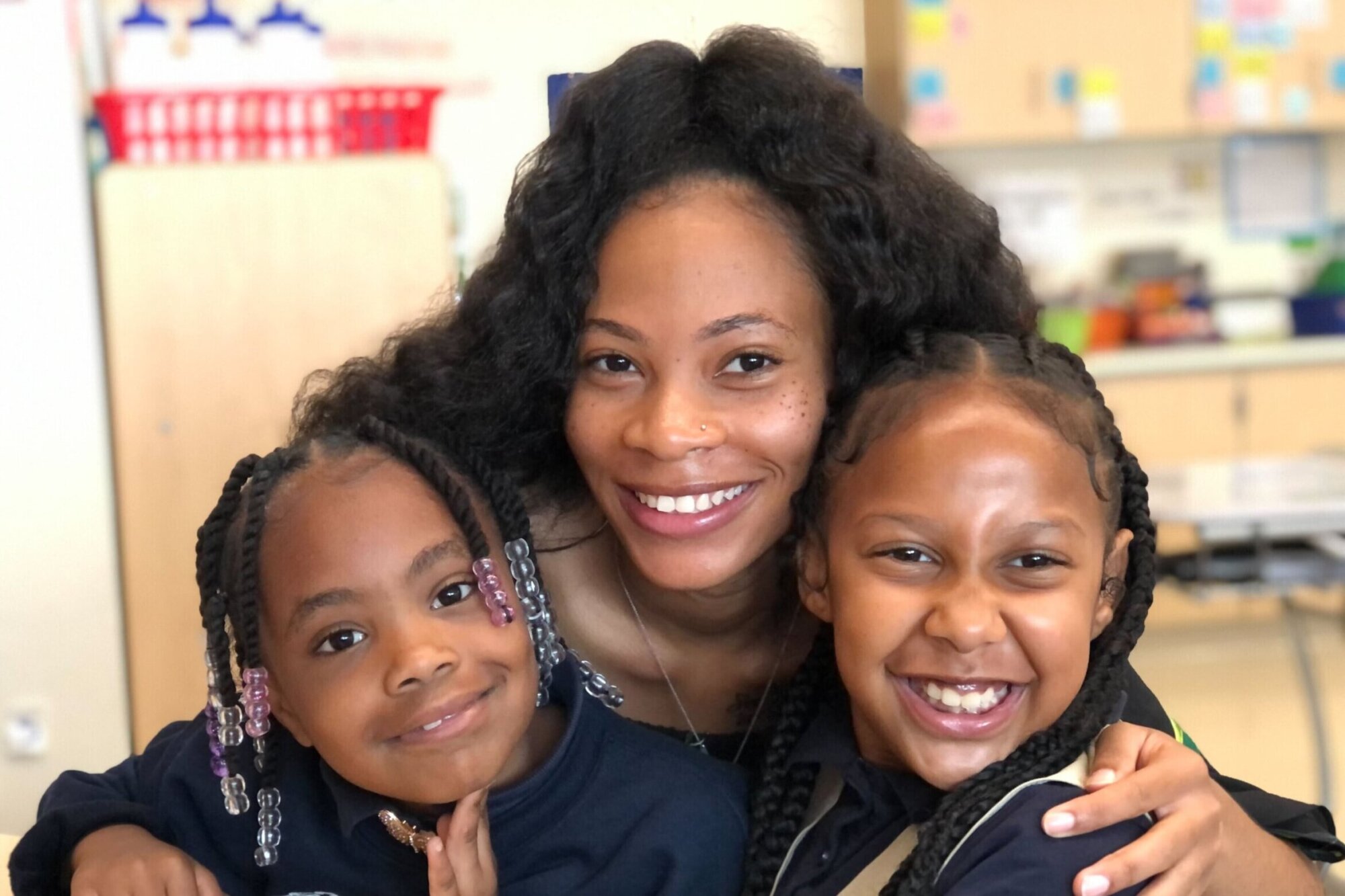 The end of the school year is near and the signs are evident at Stanton Elementary School in southeastern DC, where fifth graders are preparing for their big day – promotion to middle school.

The end of the school year is near and the signs are evident at Stanton Elementary School in southeastern DC, where fifth graders are preparing for their big day – promotion to middle school.

As the summer weather sizzles outside, Jewel Cauley’s freshman class is hard at work with a math lesson. Cauley, who is finishing her first year of teaching, sits with her students at a table, slides coins together in groups, and quizzes them.

“Last name?” she asks, pushing a silver coin towards them on the workspace.

“Nickel!” they shout in unison.

“The trouble?” she asks.

“Five hundred!” comes the answer, in tones ranging from certainty to tentative.

She then asks the students to calculate the combination of pieces in front of them. “Be confident in your work,” she reminds them, before they show their answers on the whiteboards they hold in their hands.

WTOP visited Cauley’s class in October, and now months later, as the school year draws to a close, she seemed just as fresh and energetic as she had during her first weeks on the job.

“My first year of teaching was great, I plan to come back,” she says with a smile.

There have been challenges. Some students came in academically late, with what Cauley said were social and emotional needs.

“I feel like COVID has had an effect on their behavior, but I feel like they’re young,” she said, emphasizing the word young.

“They want to play, they want to draw,” she added, and they’ve missed some of the basics children pick up in the early years of school – including how to interact in groups, how to line up for class changes in the corridor; all the skills they quickly adopted in person.

Now students instantly pick up on cues, such as “everyone on deck”, which means it’s time to clean up their workspace and move on to the next task.

Cauley’s students befriended her. Jannah Crawford and Ashley Madison, both 7, are quick to declare that Cauley remains “the best teacher”.

What makes Cauley a good teacher?

“Because she’s caring and loves us,” Crawford said.

Cauley thinks her students have made solid progress and said that’s the difference in-person learning makes. Anderson said she loves to read, “and I’m about to read at the sophomore level,” she said with a shy smile.

Asked about the challenges of adjusting to teaching in the classroom, in a year when educators across the country reported feeling overwhelmed, underappreciated and simply burnt out, Cauley said she had to do many adjustments.

However, she says, the team structure that Stanton Elementary uses for early-grade teachers has helped.

There are days, for example, when a lesson plan that seemed to work on paper clearly isn’t going well – “And in the middle of the lesson, I have to improvise.”

She said it was then about being “quick on my feet” and thinking, “OK, what do I need to do to make sure my students understand this concept?”

Cauley entered the teaching profession in a year when many seasoned educators retire early or decide to leave.

A recent survey by the RAND Corporation showed that one in four teachers plan to quit their job by the end of the year. A survey of National Education Association members also showed dire numbers, with 55% of those polled saying they were considering leaving or retiring earlier than planned, largely due to job-related stressors. the pandemic.

Stanton Elementary Principal Harold McCray said he had no vacant teaching positions at his school; rather, he said the staff stayed and worked hard to support their teachers.

McCray said that at the beginning of the year, interventions and additional tutoring were incorporated into the school day. Additionally, Saturday school was added to help students catch up.

When asked if those overtime hours — and Saturdays — had an impact on his staff’s burnout, McCray said he doesn’t get those comments. But he said that’s partly down to his approach of letting teachers have a say in the planning and operations around teaching.

“We have to be careful what we ask our teachers to do,” he said.

McCray said he tries to get as much off their plates as possible.

“If I did this by myself solo, it would be a train wreck…I depend on them, and I think they know that,” McCray said.

Back in the hallway, some teachers working with fifth graders on their next college promotion were mentoring their students.

In Cauley’s classroom, Crawford sighed, ambivalent about the coming summer. She looked forward to visiting cousins ​​and going swimming, but said she would miss seeing Cauley.

The upside, she says, is that Cauley will be teaching her in second grade.