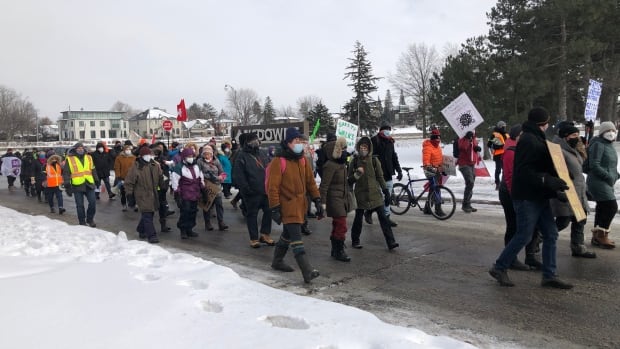 As an ongoing protest against COVID-19 public health measures enters its third weekend, resistance from Ottawa residents appears to be growing.

Roughly 500 people gathered Saturday in Lansdowne Park, less than five kilometers away from Parliament Hill, to rally against the hundreds of trucks and other vehicles that have been occupying the downtown since Jan. 28.

“We had to do something to show that we’re not happy with how our city has been completely let down, by the police, by the city administration, by the province. It’s shocking,” said counter-protester Greg Morrow.

A long-time Ottawa resident, Morrow said people in the city are used to demonstrations, but nothing like this.

“We’re used to the police doing something, and that to me is the most shocking element of all,” he said, adding that responses from police forces in other cities — where protestors were prevented from digging in for a long-term stay — causes more frustration.

“That’s very difficult, to see … how simple it would have been to prevent all of this from happening. So going forward I hope there is a serious conversation about policing and how these things can never be allowed to happen again,” he said.

Another counter-protester, Ruva Gwekwerere, said she felt she needed to do something.

“It’s really obvious our community doesn’t feel safe anymore,” Gwekerere said. “I’m here with a lot of different groups from a lot of really different parts of life who are really saying ‘enough has been enough.'”

Two rallies actually joined forces Saturday — one organized by residents, the other by labor unions unhappy with the government’s handling of pandemic support measures — and marched through the Glebe down Bank Street.

Counter-protester Nazim Khan came to Canada from Pakistan 23 years ago as a political refugee and said he’s vowing not to eat until the convoy protestors leave the city.

He described how he was told to “go back to your effing country” recently by a group of protesters on Elgin Street.

“I would rather die than seeing this lawlessness in the capital of this great country.” Khan said, adding he hadn’t eaten since Friday night.

“Canada gave me a new life, Canada embraced me and today they are disgracing the same Canada I came to make my new home.”

Ottawa police and bylaw officers have now issued more than 2,600 tickets and made 26 arrests related to the entrenched demonstration against COVID-19 public health measures.

In a news release issued Saturday morning, the Ottawa Police Service also said its officers had been dealing with “aggressive” behavior from protesters who were “overwhelming officers” and “subverting enforcement efforts.”

On Saturday evening, the force said it had launched an “integrated command centre” with its provincial and federal policing counterparts as 4,000 protesters descended on the nation’s capital during the day.

The demonstrations continue to cause road closure and transit disruptions in the downtown, with the City of Ottawa providing updates here.

Some COVID-19 vaccine clinics and testing centers have also been affected by the downtown occupation.

Due to traffic delays expected this weekend, some COVID testing locations in Ottawa will have revised hours on Sunday, February 13:

The demonstrators showed up on tractors and other vehicles, according to Cornwall police. Some told Radio-Canada they had come from as far away as the Ottawa area.

“We just want freedom back, that’s all we want. We’re all hard-working people,” said Joseph Odermatt, one of the protesters.

“I have grandkids. I don’t want my grandkids to grow up like [this]. There’s no way. Like, we’re all grown people here — when you’re sick, I stay away from you, and you do the same.”

While police were warning that the protests could disrupt the flow of traffic at the border crossing, as of Saturday afternoon the bridge itself remained open.