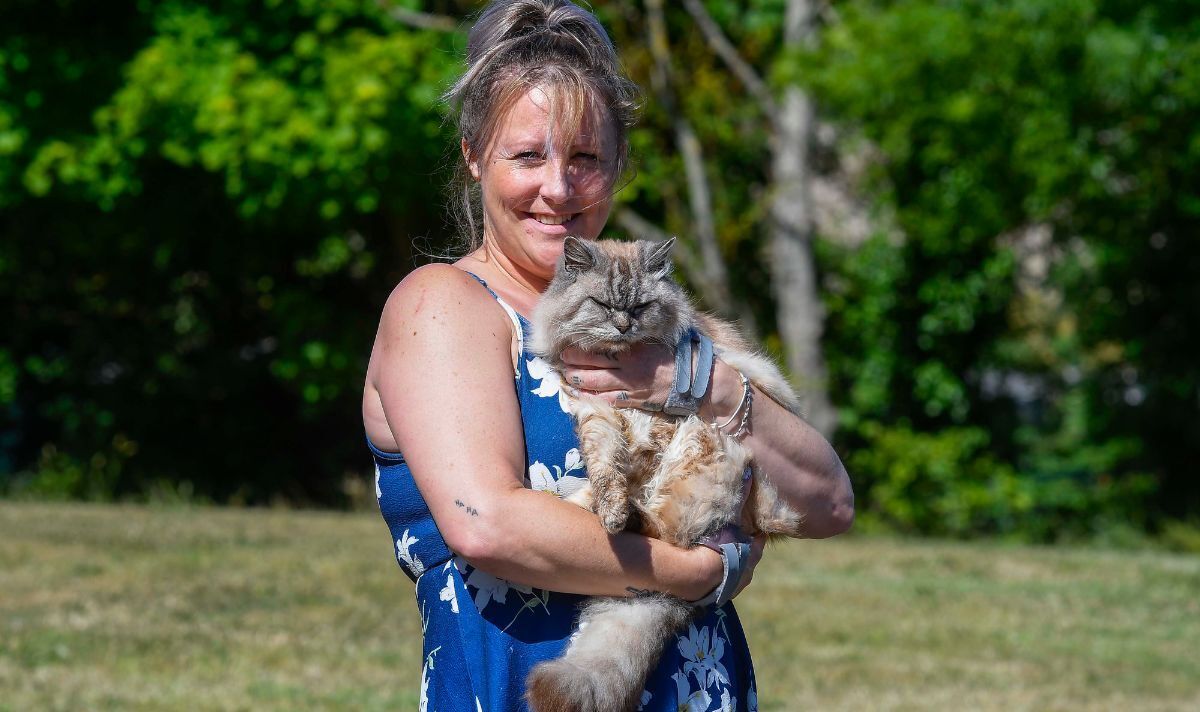 Chubbs, a 15-year-old white and gray tabby, disappeared from his home in Weymouth in September 2012, leaving his owner Donna Gallacher distraught. However, Ms Gallacher was delighted when the cat was discovered wandering the streets of Ashton-in-Makerfield in Greater Manchester earlier this month, 260 miles from the family home.

Ms Gallacher said she never gave up hope of finding the tabby cat and had searched for it for years.

His prayers were answered when Chubbs was taken to a vet after he was found and microchipped revealed his true owner.

She told the Dorset Echo: “It was surreal when I got that phone call. I didn’t think I would ever see him again. I’ve been looking for Chubbs for 10 years.

“I was overwhelmed with it. I knew in my heart he was still alive, I just knew he was out there somewhere.

“The fact that he’s coming back to me after all this time is a miracle. It’s just magical news.”

The mother-of-two believes Chubbs was robbed off the street in Weymouth in 2012 and neglected by the landlord in Ashton-in-Makerfield.

However, although Chubbs was microchipped with his identity and owner details, the search cooled until last month when a woman spotted the scruffy cat wandering around the Greater Manchester market town.

Kelly, a professional hedgehog rescuer, said she regularly noticed Chubbs following schoolchildren when she dropped her daughter off at school in the morning.

She told the BBC: “At first I thought it was someone’s pet following them instead of turning around.

“The day I picked him up he was slowly crossing the main road in random directions, weaving between moving cars and narrowly missing.

“I couldn’t leave him there to get run over, so I picked him up in the middle of the road and took him to my car.

READ MORE: How to create a cat-friendly garden – expert advice

“He was so friendly and adorable, but extremely skinny, covered in fleas, soaking wet – it had rained heavily the night before – and generally looked like a stray dog.”

Kelly took Chubbs, now 15, to Rutland Vets, who then contacted Ms Gallacher to tell her that her beloved pet had been found.

Ms Gallacher said: ‘I didn’t know anything until I got this email from the vets and when I saw Chubbs’ name my heart skipped a beat.

“The vets said Chubbs looked like he was on his last legs – he has no teeth and is covered in mats.

“He also has problems walking and we fear he has kidney problems.”

The 40-year-old said her local vets suggested the cat should have blood tests and X-rays to check why he was unable to walk properly.

She said the feline’s condition was improving day by day.

Ms Gallacher said: ‘It broke my heart to think that maybe I should say goodbye to him, but he is getting stronger every day.

“He’s happy now and I’m going to let him live out his old days. Until then, he will be a very spoiled old man.

She noted that, more importantly, her beloved pet hasn’t forgotten about her even after 10 years apart.

She said, “He follows me everywhere and doesn’t leave me alone, he keeps purring.

“And he remembers his name – when I call him, his head pops up.”