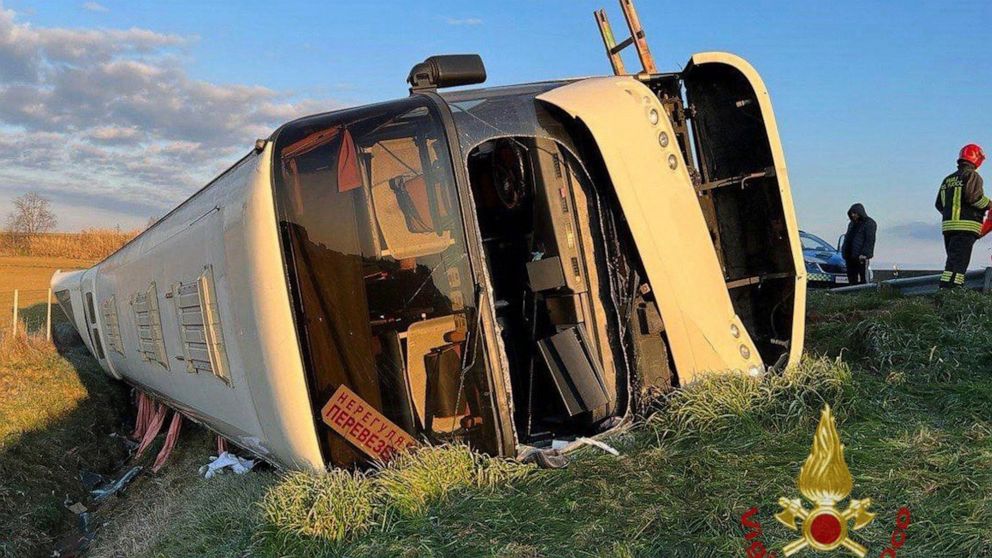 A bus carrying about 50 refugees from Ukraine has overturned on a major highway in northern Italy, killing one passenger and injuring five others injured, none of them seriously

ROME — A bus carrying about 50 Ukrainian refugees overturned on a major highway in northern Italy at dawn on Sunday, killing one person, Italian firefighters said.

Italian state TV said there were also five people injured, but none of the injuries was serious, in the accident on the A14 autostrada near Forli’, a town in the Emilia-Romagna region in northeastern Italy. It said the rest of those aboard were safely evacuated.

The bus landed on its side on a grassy slope just beyond a highway guardrail and near a farm field. Firefighters used two cranes in an operation to set the bus upright and remove it.

Italy’s Interior Ministry said the bus had set out from Ukraine and was heading south to Pescara, an Adriatic port city, when it overturned. The passengers were taken to a nearby police barracks for initial assistance, and would later resume their journey, the ministry said.

Some 35,000 Ukrainians refugees who fled war in their homeland have entered Italy, most of them through its northeastern border with Slovenia.

Forli’ is in the region of Emilia-Romagna, which borders the Adriatic Sea.

What caused the bus to overturn was under investigation. Highway Police official Andrea Biagioli said there were no skid marks. “It could have been (the driver) suddenly falling asleep,” Biagioli told state TV, stressing that in any case no cause had yet been determined.