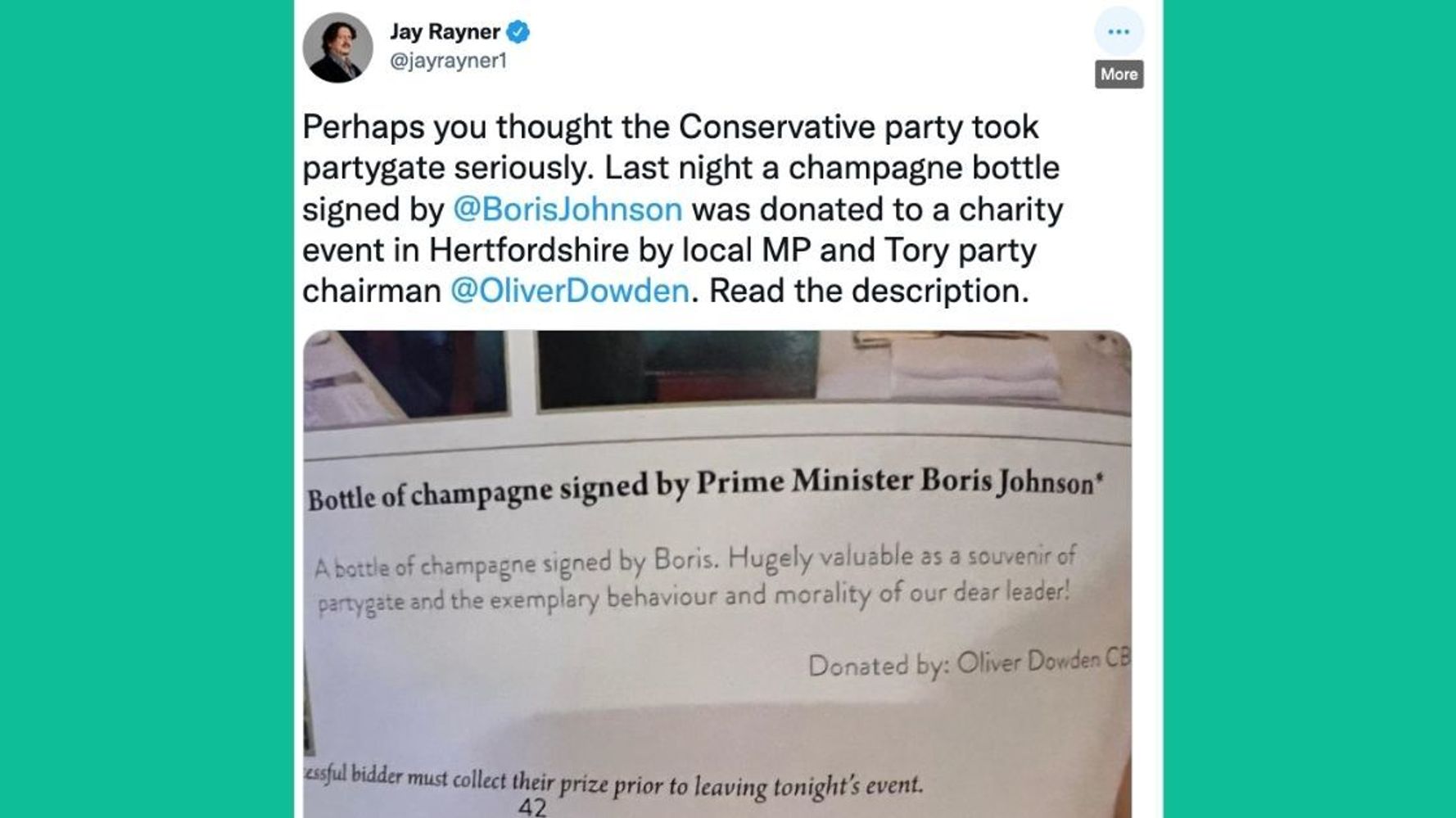 An auction donation from Oliver Dowden went viral on Friday as it appeared to completely misinterpret the public’s current attitude towards breaking the law in Downing Street.

Dowden, the MP for Hertsmere and chairman of the Conservative Party, donated a bottle of champagne signed by Prime Minister Boris Johnson for a local charity event held on Thursday evening – and it was quickly seen as a joke on the government’s breach of Covid rules during the partygate saga.

The description reads: “A bottle of champagne signed by Boris. Very valuable as a memento of partygate and the exemplary behavior and morals of our dear leader.

Just below this ironic message, the note adds: “Given by Oliver Dowden.

HuffPost UK understands the minister had no prior knowledge of the message attached to the bottle which has since caused a stir on social media.

But, food critic Jay Rayner tweeted an image of that description Friday morning with the following caption: “Maybe you thought the Conservative Party took partygate seriously.

Twitter users were furious and Rayner’s post had amassed more than 18,000 likes within two hours of posting.

But, many people slightly misunderstood the descriptive note and believed that the message itself came from Dowden.

A spokesperson for the minister later clarified the situation, telling HuffPost UK: “This item was donated in good faith several months ago for a local charity auction.

“Oliver Dowden had no prior knowledge of the description and that is obviously not his view.”

Dowden has previously said the partygate scandal should be “taken seriously” and that the events in Downing Street were “wrong and should not have happened”.

The Minister is said to be disappointed that the gift has been turned into something political.

The Hertfordshire Community Foundation also apologized for the note on Twitter this morning.

“This item was donated in good faith several months ago as part of a charity auction to raise funds to support some of the nation’s most vulnerable residents,” the tweet read. “The description was not written or seen by MP Oliver Dowden prior to the event.

“On behalf of the association, we apologize for any offense caused.”

Statement from HCF about our fundraising event last night: This item was donated in good faith several months ago as part of a charity auction to raise funds to support some of the residents most vulnerable in the county. The description was not written or seen by MP Oliver Dowden

The picture was released just as Efficiency Minister Jacob Rees-Mogg branded partygate a ‘non-story’ during his morning media rounds and a day after Scotland Yard confirmed it had now imposed more than 100 fines for Downing Street lockdown rallies.