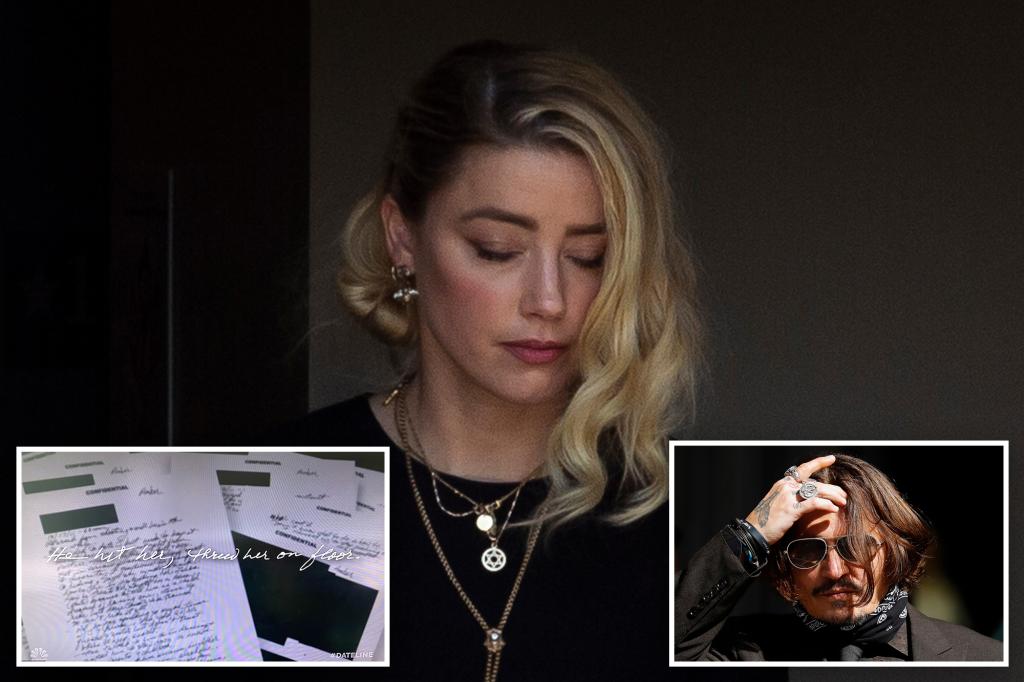 Amber Heard keeps trying to prove her innocence against her ex-husband Johnny Depp.

Ahead of the explosive interview with Savannah Guthrie that aired Friday on “Dateline,” a 20-minute clip on Peacock reveals that Heard gave the NBC show numerous documents from a doctor that “represented years, years of explanations in real time of what was happening,” she said.

“There’s a binder of years of notes dating back to 2011 from the very beginning of my relationship that were taken by my doctor, who I reported the abuse to,” Heard added in the clip.

The documents, which are displayed on screen, detail a 2012 case in which Depp allegedly “punched her, threw her against a wall and threatened to kill her”, according to “Dateline”.

Eight months later, Depp allegedly “ripped her nightgown, threw her on the bed,” according to the program, and in 2013 he allegedly “threw her against a wall and threatened to kill her.”

Heard’s legal team was unable to admit the documents into evidence in the highly publicized lawsuit due to “hearsay”.

Meanwhile, in response to Heard’s interview with NBC, a spokesperson for Depp told “Dateline” that the actor just wants to “move on” after winning his lawsuit.

“It is unfortunate that as Johnny seeks to move on with his life, the defendant and her team are beginning to repeat, re-imagine and challenge issues that have already been decided by the Court and a verdict that has been decided. unanimously and unequivocally by the jury in favor of Johnny,” they said in a statement.

Heard’s so-called proof of his doctor is the last title of Heard and Guthrie’s conversation. In Wednesday’s teaser clip that aired on the “Today Show,” Heard told the broadcaster that she still “absolutely” loves her alleged abuser.

“I loved him with all my heart,” the ‘Aquaman’ actress said of Depp. “I tried my best to make a deeply broken relationship work and I couldn’t. I have no bad feelings or ill will towards him.

In Tuesday’s preview, she said she “stands behind every word” she said during her losing libel testimony.