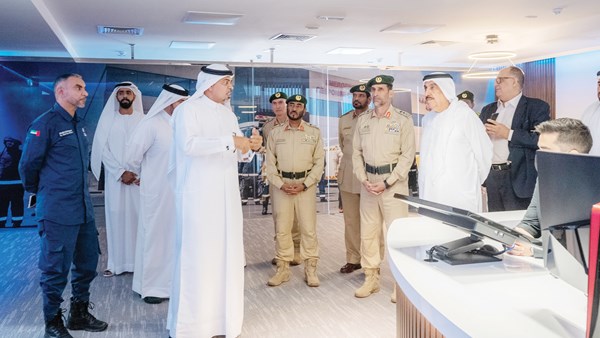 His Excellency Lieutenant General Abdullah Khalifa Al Marri, Commander-in-Chief of Dubai Police, and his accompanying delegation visited the ENOC Emergency Response Center. They were received by Saif Humaid Al Falasi, CEO of ENOC Group, and a number of center officials. During the visit, a meeting was held, attended by the delegation, which included Major General Abdullah Ali Al Ghaithi, Acting Deputy Commander-in-Chief for Operational Affairs, Director of the General Organizations Security Department , facilities and emergencies. , Major General Dr. Muhammad Nasser Al-Razuqi, Director of the General Department of Transport and Rescue, Expert Colonel Ahmed Atiq Bourguiba, Director of the Resilience Center, and a number of officers.
His Excellency Lieutenant General Al Marri was briefed on the systems and programs of the first-of-its-kind emergency response center in the Jebel Ali Free Zone (Jafza), development plans for the center and a review of a number of topics of common interest.
After the meeting, His Excellency and the accompanying delegation toured the corridors of the ENOC Emergency Response Center and toured a highly advanced operations room equipped with artificial intelligence, allowing the work team to quickly receive and respond to incidents, in addition to the early notification technology that allows notification of up to 400 users in just 8 seconds with the acknowledgment function, to initiate the alert and response process by the work teams and the general management of the group.
His Excellency was briefed on the centre’s fleet of vehicles, the most important of which are two large fire engines which are among the latest and first of their kind in the world in terms of technology and specification, designed 90% based on of specifications personalized by the staff of the ENOC emergency response center, which allows it to deal with industrial and oil fires.
For his part, Saif Humaid Al Falasi, CEO of ENOC Group, said: “The center strives to keep pace with the highest health, safety and environmental standards across all sectors of the group.