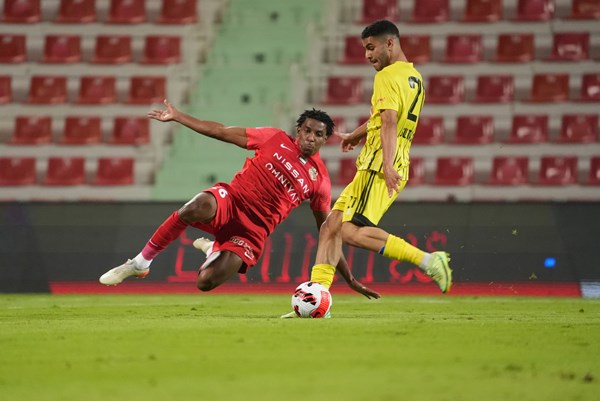 Mounir Rahouma (Dubai)
Shabab Al-Ahly ended the long streak of negative results by beating Ittihad Kalba 2-1 in the game at Dubai’s Rashid Stadium, to end the 70-day fasting march for victories, and Norway’s Thomas Olsen scored both goals in the 4th and 22nd minutes, while he scored the only goal for the Malaba “Tigers” side in the 62nd minute.
Al Fursan’s side took their tally to 33 points, advancing to fifth place, while Ittihad Kalba’s balance froze at 24 in tenth place.
Despite the rest of nine players from the Al-Ahly youth team, compared to the League Cup final, the young faces who participated in the match presented a good level, and managed to correct the way of the team and to restore the tone of the victories, while the “Tigers” The team encountered great difficulties, especially in the first half. Despite having corrected his errors in the second half and scored a goal, he failed to come back, especially in front of the brilliance of goalkeeper Hassan Hamza, so that the “Knights” were tied. continued to be chased by Union Kalba in the Pro League.