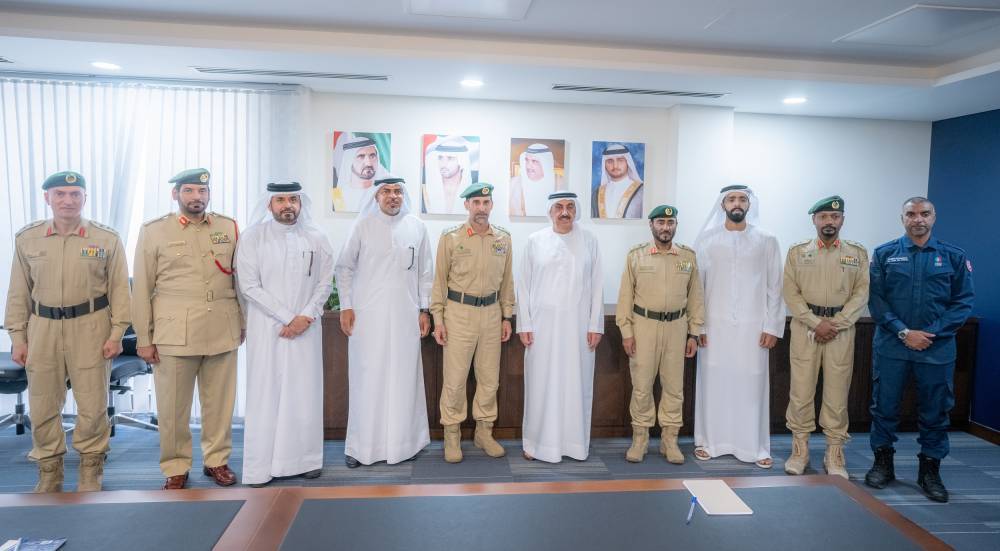 Al-Marri was briefed on the systems of the first-of-its-kind emergency response center in the Jebel Ali Free Zone (Jafza), the center’s development plans and reviewed a number of topics of common interest .

He underscored Dubai Police General Command’s keenness to build bridges of communication with government and private bodies and institutions, which serve the country and the public interest, praising the efforts of the task force at the center and their important role in strengthening the working system, dealing with various emergency crises, and the support provided by the center to all government agencies and vital sectors in the Emirates.

After the meeting, he and the accompanying delegation toured the halls of the center and visited a highly advanced operations room equipped with artificial intelligence that allows the work team to receive and respond quickly to accidents, and helps firefighters reduce response time, thanks to the initial detection of the type of accident through hotlines and monitoring devices. , which allows the team to process and make the appropriate decisions, to control the accident with a thorough knowledge of all the details of the emergency, before moving to the accident site. And the early notification technology that notifies up to 400 users in just 8 seconds, with acknowledgment, to trigger the alert and response process for work teams and group general management.

He was briefed on the centre’s fleet of vehicles, the most important of which are two large fire engines which are among the latest and first of their kind in the world, in terms of technology and specification, designed 90% on the basis of specifications assigned by the center’s emergency response team allowing them to deal with industrial and oil fires.

Saif Al Falasi said: “We have been honored by the honorable visit of Lieutenant General Abdullah Khalifa Al Marri to this center which is part of our continuous efforts to keep pace with the highest standards in health, safety and environment in all countries. sectors of the group, and to strengthen our contribution to the establishment of a solid infrastructure for the national energy sector, alongside our strategy and our ongoing plans to protect our assets. In Jebel Ali, in cooperation with the Dubai Police in the first place, and other Strategic Partners.”

It should be noted that the center covers an area of ​​over 90,000 square feet and operates 24 hours a day with three shifts and a fourth shift to cover break times and alternating shifts.

At the end of the visit, the two parties exchanged commemorative shields.