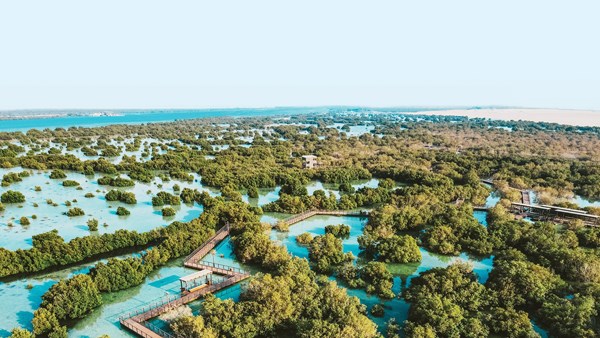 Abu Dhabi’s Environment Agency expected a 35% decrease in carbon dioxide per capita in 2030, down from a 6% decrease last year, according to the Emissions Inventory Report greenhouse gas emissions from Abu Dhabi 2021.
According to the greenhouse gas emissions inventory, the reduction in carbon dioxide per capita contributes to a range of health benefits, including averting 839 premature deaths, averting 11,700 visits to health facilities and the economy $12.5 billion to $15.8 billion in environmental damage costs.
Greenhouse gas inventories in Abu Dhabi contribute to the development of climate policies at the emirate level, and the inventories support the country’s compliance with its obligations under the United Nations Framework Convention on Climate Change. climatic changes.
The authority said its implementation of the emirate’s fourth round of greenhouse gas emissions inventory has helped update inventory data for 2018 and assess future emission levels .
The inventory targets a range of emissions, including carbon dioxide, methane, nitrous oxide, hydrogen fluorocarbons, perfluorocarbons and sulfur hexafluoride, all of which are primary gases that contribute directly to global warming. Carbon dioxide, nitrogen oxides, volatile organic compounds and sulfur dioxide are also monitored and are all precursors and indirect emissions. The inventory also monitors anthropogenic black carbon emissions.
The results of the inventory indicated an increase in greenhouse gas emissions in the first nine months of 2021 compared to the same period in 2020, a slight increase in the production and consumption of electricity and water, and an increase in the number of vehicles. climate change in the emirate of Abu Dhabi, and link it to the global effects of the “pandemic”.

Climate change
The Abu Dhabi Environment Agency is leading a series of projects aimed at reducing the impact of climate change. After His Highness Sheikh Mohammed bin Rashid Al Maktoum, Vice President and Prime Minister of the United Arab Emirates and Ruler of Dubai last October announced the United Arab Emirates’ strategy to achieve climate neutrality 2050, the Authority is preparing to play a leading role in leading the efforts of the Emirate of Abu Dhabi to help achieve climate neutrality Achieve the goals of this ambitious initiative.
The authority stresses that moving forward towards climate neutrality by 2050 requires collective action to reduce greenhouse gas emissions across all sectors using natural and man-made carbon sinks, further advancing the economic diversification agenda in Abu Dhabi through innovative low-carbon solutions.
The Authority and relevant authorities in the country continue to implement the Abu Dhabi Global Environmental Data Initiative project for blue carbon, which aims to understand carbon storage and other services provided by blue carbon coastal and marine ecosystems across the United Arab Emirates.
The Environment Agency – Abu Dhabi has implemented initiatives to develop natural carbon sinks and improve environmental resilience by planting 14 million mangrove trees, in cooperation with the Department of Municipalities, Transport and Municipalities of the Regions from Abu Dhabi, Al Ain and Al Dhafra. Planting these trees over the next 25 years is expected to help store around 200,000 tonnes of carbon emissions, which is equivalent to the energy consumption of more than 20,000 homes for one year. Additionally, mangroves provide environmental services that help reduce the impact of climate change. .