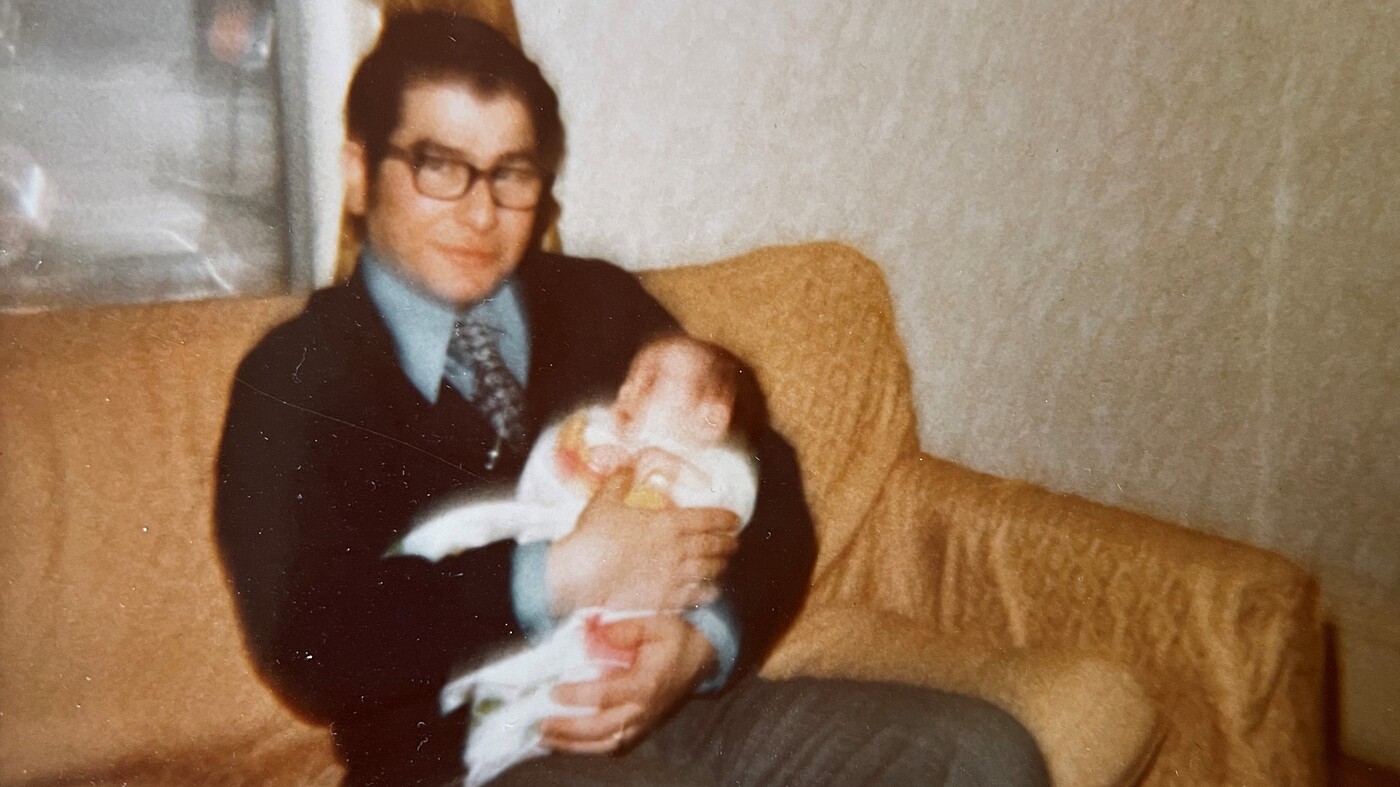 Constantine Tsioulcas, holding his daughter Anastasia like a baby.

Constantine Tsioulcas, holding his daughter Anastasia like a baby.

My dad gave me strict instructions: your sole focus must be to pamper the paper-thin, nearly transparent phyllo dough. You need plenty of melted butter and a few clean, damp kitchen towels tucked right next to you to use as blankets for the temperamental phyllo. Prepare your filling already and make sure you have wrung out well everything water the spinach with yet another towel, or two, or three. (There will be more water than you think. You will use a lot of dishcloths.) Work as fast as you can, but don’t be afraid.

This is how my father, Constantine Tsioulcas, taught me to make spanakopitathe spinach pie he grew up eating in Alexandria, Egypt, the city he was born and raised in.

Our family recipe, passed down from generation to generation from Greece to Egypt and back, calls for individually wrapped triangles that feature many layers of crispy puff pastry; no greenish mud bricks for us. The filling, on the other hand, is very simple: spinach, good strong feta cheese, a touch of freshly grated nutmeg, lightly sautéed garlic, a little salt and a few healthy peppercorns, plus those leaves of flimsy dough and that ungodly amount. of butter. That’s it. (Technically this dish should be called spanakotiropita – spinach and cheese pie – but that’s a lot of syllables for Americans, as even my dad would grudgingly admit.)

Dad guided me to roll out a large rectangular sheet of phyllo dough, brush it with butter, then quickly lay another sheet on top. “Hurry, cover the rest of the phyllo with the towel,” he would say, reminding me that the dough would dry out and crack almost instantly if left uncovered again.

We cut the sheet into three long strips and brushed each strip of phyllo pastry with melted butter before placing a little filling in a bottom corner of the pastry. Then we fold the pie over itself again and again into tightly rolled up triangles, like the way soldiers ceremonially fold a flag.

Every time Dad mixed a batch of spanakopita filling, he always said to me, “No eggs!” It’s not a quiche. But I could hear how he relished the word Quiche even though he didn’t care about his egg weight and down to earth. French was his third language; English, his fourth. He loved French; his name was my father, follow the French way, no baba as we would in Greek or Arabic.

My mother, an American, had met him by chance in Athens. She was a tourist in her thirties. He was barely past his teens, an aspiring painter who worked as a waiter to help his struggling family; they, like many minority communities in Egypt, were expelled and recently settled in the Greek capital, a place that belonged to them and not theirs.

My father’s facility with languages ​​became his destiny: the day he met my mother, dad was the only waiter on duty who spoke English and so he was assigned to her table. He was immediately smitten and informed her, “You may think I’m just a waiter, but I’m an artist.” Somehow – really, inexplicably – that pickup line worked. She agreed to a quick coffee date before leaving town. Thereafter, they corresponded by postcards and letters. Soon after, my mother flew to Athens again, this time to marry her.

Right after their marriage, they separated for months; she returned to the United States without him. During their courtship by mail, a military dictatorship had taken over Greece, and he could not leave the country without permission – once again finding himself at the mercy of larger political currents in a country he thought could claim it safely as his own. He finally managed to follow her to the freezing, brittle city of Boston, where the cold, gray Atlantic was nothing like the shining shores he had now left twice.

Their brainchild was to live in the United States just for a short time, wait out the junta that had descended on Greece just months before their wedding, and then return to Athens. This does not happen. I was born as their only child a few months before the collapse of the Colonels’ regime, and they decided to stay in this country for the time being. It was a temporary decision that lasted his whole life.

Dad never understood most Greek-Americans, the community with whom he theoretically had much in common. They just weren’t Egyptians like him: cosmopolitan, fluent and educated in several languages, regal and more than a little snobby. (“It’s the people of the goats and the villages,” he would say dismissively.) He was an expatriate who yearned to return to a house that no longer existed. He tried to hide his loneliness. While waiting for the paint on his canvases to dry, he takes long walks alone along the rocky, monochromatic coast, so different from the Mediterranean blues of the Alexandria Corniche.

“Then peirazei“, he said. “It does not matter.”

Dad died of a heart attack in his sleep just after I turned 14. He was only 41 years old. My mother, who had always had mental health issues, completely broke down after her death and largely retreated to her own world.

After dad died, I had very few memories of him, but I had some of his recipes in my memory and in my fingers. Years later, when I got married, I gave our spanakopita recipe to caterers so it could be served as part of our wedding meal. It was one of many reminders of my father that I stitched up during the day, in an almost secret language of familial love.

I omitted the garlic when I gave them our recipe, thinking the wedding guests would probably prefer not to sweat any sticky stuff or stink on what must have been a hot, humid June night. The caterers told me that they were a little worried about working with filo dough, an ingredient they haven’t mastered yet; this was before phyllo became such a cliché appetizer.

No problem, I told them; you just needed a little confidence, a few tricks, and a little extra butter on hand, just in case. I taught them baby dough. I carefully wrote step-by-step instructions on how to fold each small packet of spinach and cheese into a precise triangle, ideally sized for distribution – individual pitas that, when baked, would turn out flaky, bronzed and incredibly crispy, thanks to these generous referrals. melted butter. On our wedding day, the spanakopita turned out wonderful, although I missed the garlic. I’ve heard guests rave about the dish to caterers.

Several months later, I saw what appeared to be our spanakopita recipe posted in Gourmet magazine. Each element was there, in the proportions that I had passed on to myself: filo, butter, spinach, feta, a dash of nutmeg, salt, pepper. No garlic. Really, way too much butter, but you’ll have plenty more in case you have a phyllo emergency. And there were my exact instructions on how to fold the spanakopita into a nice little package, neatly wrapped like a flag. Dad’s recipe was now known to the world, but broken from its roots, just like me, just like my dad had been.

You can still find this spanakopita recipe online, complete with a beautifully shot and completely mouth-watering photo of these tanned, flaky triangles, cut open to reveal the tasty spinach and cheese filling hidden inside.

Who knows what happened. Maybe someone gave it or sold it to the magazine, or maybe someone from the catering team also worked on it. Maybe someone made it for a friend or for a party, and the recipe was passed on to someone else, like beloved recipes do. I would never know.

Online, the recipe received dozens of rave reviews, although many cooks wrote that they added eggs or lemon juice or dill or parsley or onions or almost any number. other ingredients that are delicious and culturally appropriate, but obscure purity and lightness. of this particular and elementary spanakopita which is certainly not a quiche.

Others mention that they added all sorts of heresies like, Memorandum of Understanding Panagia, cheddar cheese or raisins. Raisins! Dad often stammered, back when Americans were just discovering Mediterranean cuisine, “What the hell are these foreigners and putting raisins in every dish to make it exotic?”

He liked to mix several languages ​​into a single sentence, expecting me to follow like a true Alexandrian. When he offered opinions on these “outsiders” to me, his American-born daughter, he sometimes used Greek: frank. Sometimes instead he would say ifrang — Arabic, and almost the same word: literally, “Franks”, whose innate westernness made it a complete mystery. In either language, he could have used a much more prosaic and general word for “outsider”, but he loved the medieval connotations and high drama of his choice of words, reigniting an ancient East-West battle in our squat little kitchen. And for him, Greek and Arabic were fraternal twin languages, even if one was a playmate he had to leave at the abrupt end of his own childhood.

Then peirazi. His Alexandria disappeared decades ago, and my father is long gone too, much longer than I knew him alive. The recipe I received as a rare and precious inheritance is just one more recipe among millions online. Anyone who comes across it by chance doesn’t hear Papa complaining about the Franks and their raisins. Such a cook wouldn’t necessarily care either. People will do what they want.

My only wish is that people who try the recipe enjoy the process of brushing the butter onto the dough, folding the phyllo over and over. I hope when they bite into a piece, they savor those insanely crispy layers of phyllo and the simple game of spinach and feta. Dad’s spanakopita will never mean the same to them as it does to me, but it will still be delicious.