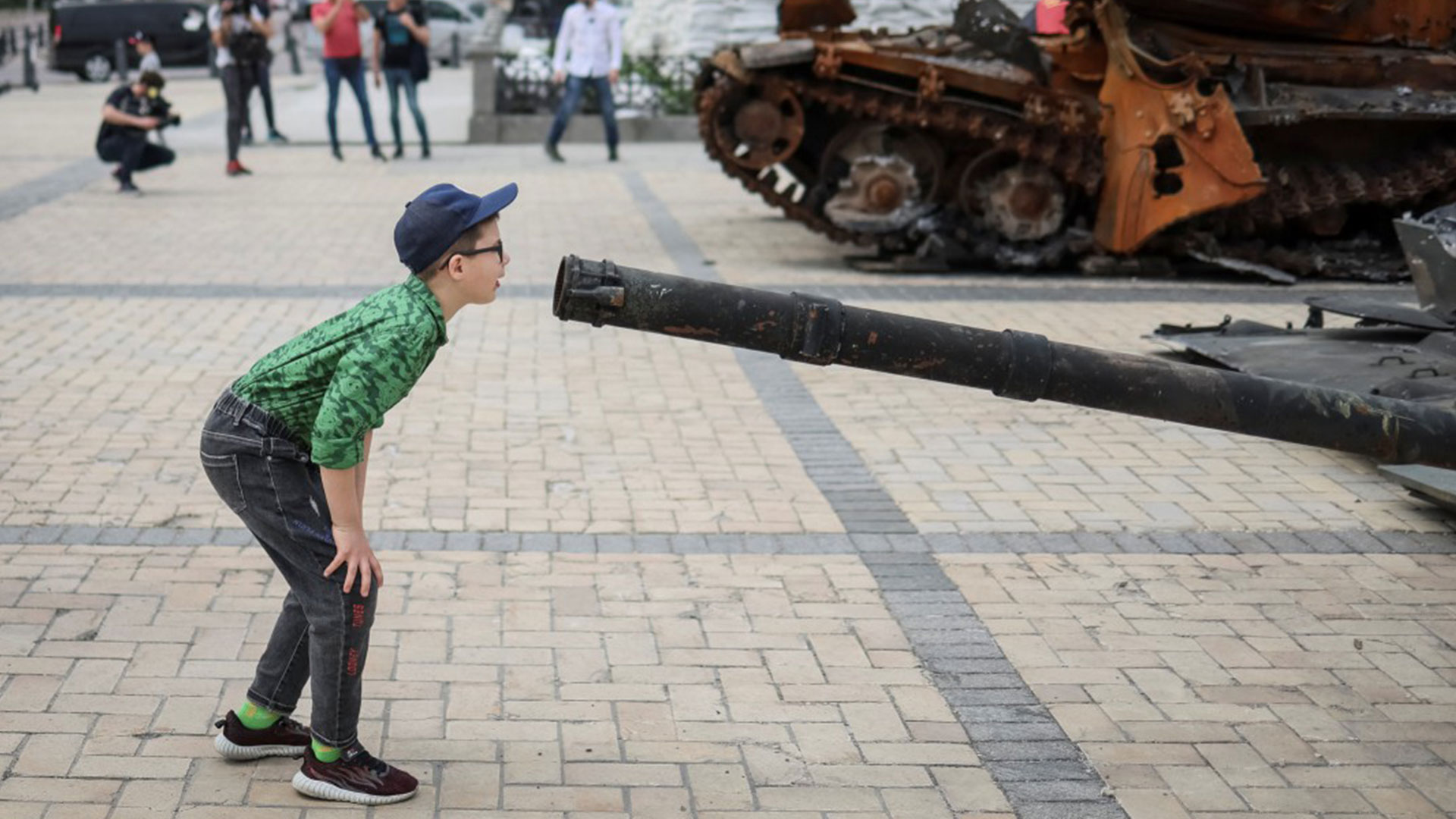 A BOY stares at the barrel of a destroyed Russian tank in a harrowing spectacle of Ukrainian resistance.

The boy was among those checking for destroyed enemy vehicles in kyiv even as war continued to rage in the east and south of the country.

The Russian forces – who arrived in a 50-mile column of tanks and armor – were held off by brave resistance fighters wielding shoulder-thrown weapons in late March.

Ukrainian President Volodymyr Zelensky has ordered wreckage to be displayed as a monument to the failure of Vladimir Putin.

Other images from Ukraine reflected the nation’s warrior spirit as it fought for its existence – and the will of younger generations to carry on the fight.

Children in camouflage uniforms Andrii, 12, and Valentyn, 6, were pictured giving each other a toy gun in a trench.

Ukraine on Sunday ruled out a ceasefire or any territorial concession to Moscow.

Ukraine’s chief negotiator, Mykhailo Podolyak, said: “The (Russian) forces must leave the country and after that the resumption of the peace process will be possible”, adding that concessions would backfire because Russia would use the break in fights to come back stronger.

Meanwhile, the Polish president traveled to Kyiv to support the country’s European Union aspirations, becoming the first foreign leader to address Ukraine’s parliament since the start of the war.

Lawmakers gave President Andrzej Duda a standing ovation after he said only Ukrainians can decide their future.

Meanwhile, Russia has stepped up its attack in the east and south of the country, pounding the Donbass and Mykolaiv regions with airstrikes and artillery fire.

The heaviest fighting has been concentrated around the twin towns of Sievierodonetsk and Lysychansk, Interior Ministry adviser Vadym Denysenko told Ukrainian television on Sunday.

The Ukrainian military said Russian forces launched an unsuccessful attack on Oleksandrivka, a village outside Sievierodonetsk.

In a victory for Ukraine, an explosion on Sunday injured the Moscow-appointed mayor of the town of Enerhodar next to the Zaporizhzhia nuclear power plant.

According to Russian news agency RIA, Andrei Shevchuk, 48, is in intensive care after the hit.

A military source has revealed that a Russian cruise missile was meters away from causing an environmental disaster when it hit a Ukrainian chemical plant.

It exploded in a ball of fire and carved a crater 10 feet deep and 40 feet wide just 100 yards from the storage tanks of the vast fertilizer manufacturing plant.

About 120,000 tons of poisonous and explosive compressed liquid were stored at the facility in the southern port of Odessa.

Many of you want to help the five million people caught up in the chaos – and now you can, by donating to the Sun’s Ukraine Fund.

In the unlikely event that the British Red Cross raises more money than it can reasonably and efficiently spend, any excess funds will be used to help it prepare for and respond to other humanitarian disasters all over the world. the world.