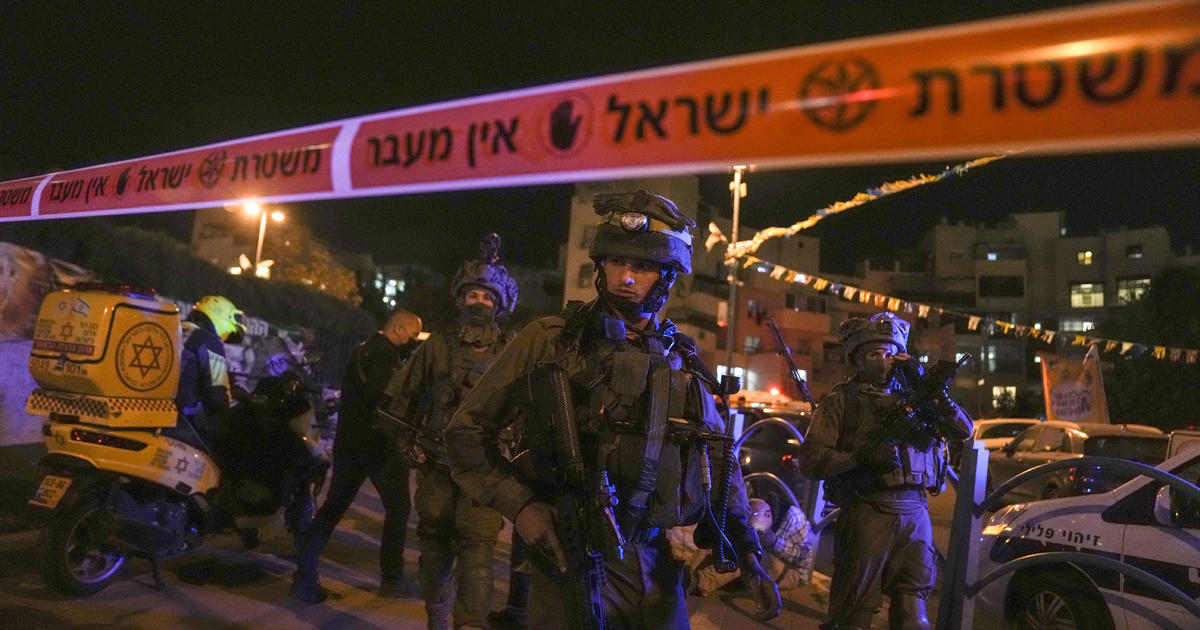 Two Palestinian assailants carried out a stabbing attack in a town near Tel Aviv on Thursday evening, killing at least three people and injuring four others before fleeing in a vehicle, the authorities said. Israeli authorities.

Police launched a massive search for the attackers, setting up roadblocks and dispatching a helicopter. The stabbing, which occurred on Israel’s Independence Day, was the latest in a series of deadly attacks in Israeli cities in recent weeks.

“We will get our hands on the terrorists and their supporting environment, and they will pay the price,” Israeli Prime Minister Naftali Bennett said after huddled with senior security officials Thursday night.

Israeli-Palestinian tensions have exploded in recent weekswith the attacks in Israel, the military operations in the occupied West Bank and violence at Jerusalem’s most sensitive holy site. The site, which houses the Al Aqsa Mosque, was the scene of further unrest earlier on Thursday.

Alon Rizkan, a doctor with the Israeli Magen David Adom Rescue Service, described a “very difficult call” when he arrived at the scene in Elad, an ultra-Orthodox town near Tel Aviv. He said he identified three people who died at various locations. At least four other people were injured, one seriously, officials said.

Israeli media quoted police as saying there were two attackers, and just before midnight police said they were still looking for the attackers. They called on the public to avoid the area and urged people to report suspicious vehicles or people to them.

Israel celebrated its Independence Day on Thursday, a festive national holiday when people typically have barbecues and watch air shows.

Defense Minister Benny Gantz ordered a closure of the West Bank, imposed before the holidays and preventing Palestinians from entering Israel, which will remain in effect until Sunday.

“This was a horrific attack targeting innocent men and women, and was particularly heinous as Israel celebrated its Independence Day,” Blinken said in a statement. “We remain in close contact with our Israeli friends and partners and stand firmly by their side in the face of this attack.”

“The killing of Palestinian and Israeli civilians only aggravates the situation at a time when we are all trying to achieve stability and prevent escalation,” the official Wafa news agency said.

The Palestinian militant group Hamas, which rules the Gaza Strip, welcomed the attack and linked it to violence at the holy site in Jerusalem.

“The storming of Al-Aqsa Mosque cannot go unpunished,” Hamas spokesman Hazem Qassem said. “The heroic operation in Tel Aviv is a practical translation of what the resistance warned against.”

The Al-Aqsa Mosque compound is the third holiest site in Islam and is built on a hill that is the holiest site to Jews, who call it the Temple Mount. It lies at the emotional heart of the conflict, and Palestinians and Israeli police have clashed there several times in recent weeks.

Early Thursday, Israeli police entered the site to evacuate Palestinian protesters, after Jewish visits resumed which had been halted for Muslim holidays.

As the tours resumed, dozens of Palestinians gathered, chanting “God is greatest.” Scuffles broke out when the police went to arrest one of them. Police fired rubber bullets at the sprawling esplanade as some Palestinians took shelter inside the mosque itself. Police could later be seen just inside a barricaded mosque entrance.

Police said they responded to dozens of people shouting at the incitement and throwing rocks, and one officer was slightly injured. The Palestinian Red Crescent emergency service said two Palestinians were taken to hospital after being beaten with batons.

Unlike previous clashes, Palestinian witnesses said there was no stone-throwing at the start. Some of those who had taken refuge inside the mosque started throwing stones and other objects when the police entered the building. The witnesses spoke on condition of anonymity for security reasons.

Under informal arrangements known as the status quo, Jews are allowed to visit the site but not pray there. In recent years, they have visited in ever-increasing numbers with police escorts and many have prayed quietly, angering Palestinians as well as neighboring Jordan, which is the site’s guardian. Palestinians have long feared that Israel plans to eventually take control of the site or divide it.

Israel says it is determined to maintain the status quo and accuses Hamas of inciting the recent violence.

It was one of the worst bloodshed in years. At least 18 Israelis have died in five attacks, including a stabbing in southern Israel, two other shootings in the Tel Aviv area and a shooting last weekend in a settlement in the West Bank. Nearly 30 Palestinians died in the violence, most of whom had carried out attacks or participated in clashes with Israeli forces in the West Bank. But an unarmed woman and a lawyer who appears to have been inadvertently shot were also killed.

Israel and Hamas fought an 11-day war a year ago, fueled in large part by similar unrest in Jerusalem.